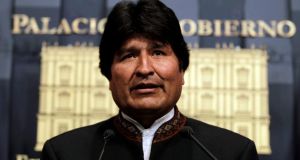 Bolivian president Evo Morales will become the first South American head of state to visit Ireland when he arrives in Dublin today for a two-day visit. Mr Morales will meet President Michael D Higgins and Minister for Foreign Affairs Charlie Flanagan, with whom he will discuss trade and political links between the two countries.

In a statement, Mr Flanagan said he would also raise the case of Michael Dwyer, the Irishman killed by Bolivian security forces in 2009. Mr Flanagan said he hoped the “historic visit” would assist efforts to strengthen relations with Bolivia and Latin America more generally.

He said trade between the two countries was increasing steadily, albeit from a low base, and he was conscious of the important role played by Bolivia on the global stage in areas such as climate change and sustainable development.

Mr Morales will also visit a dairy-processing plant and attend an event with the Bolivian community. An agreement is expected to be signed between Bolivia and the Higher Education Authority on third-level co-operation.

Ireland is the final stop for Mr Morales on a programme that included France, Germany and Italy.