Every harsh Coalition decision seen as betrayal by Labour 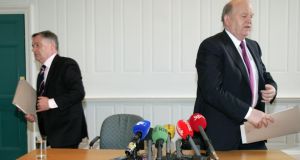 Labour Minister for Public Expenditure and Reform Brendan Howlin and Fine Gael Minister for Finance Michael Noonan. Labour’s problems are compounded by the fact that its own pre-election pledges and promises were made in laboratory conditions and could not be sustained. Photograph: Frank Miller

At times combing through the staff reports of the EU Commission and the International Monetary Fund this week, you were reminded of the old canard about economist-think: “That’s all very well in practice but will it work in theory?”

It’s hard not to come to the conclusion that at least some of the solutions, recommendations and admonitions that feature in both reports can only be achieved in sterile laboratory conditions, not in the imprecise, fuzzy, complicated political world in which we live.

Ireland is a much smaller society than many of our EU counterparts and retains a familiarity and coherence that marks us as distinct. The Dr Spock-like logic of an obdurate decision will always be trumped by the human condition, a hard case or a heartrending narrative.

The report acknowledged that these schemes serve a definite social purpose but continued: “[They] have, at best, an extremely weak activation and back-to-work component, and, at worst, trigger ‘subsidised employment traps’.” The report refers to a review that recommends such programmes be more geared to promoting a return to the open labour market.

The IMF report argues that such community employment schemes cost twice as much as education courses.

But there is two inherent flaws to those arguments. The first is contained elsewhere in the staff reports. The rate of unemployment has risen since 2008 to over 14 per cent and 30 per cent of those have been unemployed for over two years. Sure, there are areas where there are skills mismatches but the prospect in the short to medium term of vast numbers returning to the “open labour market” is zero.

Social purpose
And the “social purpose” element of community employment schemes should not be underestimated. They are popular with political parties of all hues and brook no resistance. Besides providing employment they are seen to have a tangible, visible benefit to the parishes and neighbourhoods they serve. In a scenario where being private sector job-primed is not realistic, other factors have to be considered including the dignity of work, the sense of doing something worthwhile, having a structured week and a routine, and learning new skillsets that may or may not be useful in the workplace. Few involved in public life would even begin to identify with their portrayal as “subsidised employment traps”.

Equally, both staff reports have majored on the need to grasp the nettle of repossessing properties. The language is unsparing. Concerns are raised about the low level of possessions in Ireland as against comparators. The commission suggests a High Court judgment from 2011 may have lulled some property owners into the belief that banks cannot repossess their homes, leading them to prioritise unsecured debt such as credit card debt over secured mortgages. The IMF argues for specialist judges to be appointed to speed up home repossessions.

While there is a nod towards the Michael Davitt gene (the Irish compulsion towards property ownership) and the acceptance that it will be used as a “last resort”, the concept of debt forgiveness (unaffordable and unfair to compliant debtors) is not countenanced.

Labour Party unease about the repercussions for it of a major increase in repossessions has been clear for some time. There were indignant protests when Department of Finance secretary general John Moran had the temerity to tell a Dáil committee the level of repossessions in Ireland was unnaturally low at 0.25 per cent compared to 3 per cent in the UK. Minister for Social Protection Joan Burton vowed that a wave of repossessions would not be allowed to happen. There’s a fault line there and you sense it is at the Labour end of Government where the tremors will be felt most.

The reality is that the troika of international lenders isn’t a think-tank and the two Government parties don’t have the luxury of dismissing it out of hand without coming up with some feasible alternative.

Troika officials have argued consistently in private that their presence in Ireland provides a fig leaf or cover to the authorities to take hard decisions. But it is a struggle to think of any individual policy move that has impacted substantially on Fine Gael alone as compared to the Government as a whole. With Labour, every single harsh decision by Government takes on the status of betrayal.

The party has had successes: it has softened some of the more austere measures, has kept key utilities in State hands, has managed to keep the public sector onside and has protected core social welfare rates. For those achievements it has received zero recognition. It has also made many mistakes. For those it has received unrelenting criticism.

The party overplayed its hand before the election and demonstrably failed to fulfil its more rash promises and sloganeering. Eamon Gilmore’s dismissal of some of these as chapelgate politics didn’t go down too well either. And now, embarrassingly, the European Commission and IMF staff papers are saying that the last two budgets have been regressive – marginally so, but still falling a long way short of Labour’s promise of a fair society.

“The troika is correcting our homework,” Minister for Communications Pat Rabbitte conceded early enough into the Coalition’s term. In saying that he displayed a nice turn of phrase but not the mutinous disposition many Labour supporters expected of its leading personalities as the party entered power.

The resistance in opposition to the troika has given way to passivity in power.