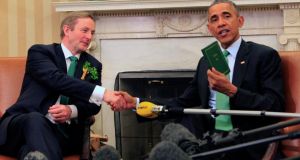 The St Patrick’s Day gifts were delivered in the White House more than 100 years after Yeats had lunch there with president Theodore Roosevelt when, legend has it, the poet tried to convince the bemused president of the existence of “the little people” in Ireland.

Even the traditional shamrock handover had a Yeats theme. The Taoiseach presented in a Waterford Crystal bowl, engraved with lines from the poems He Wishes for the Cloths of Heaven.

The poems were chosen to acknowledge the first World War and next year’s centenary of the 1916 Rising, as well as Yeats 2015, the year-long celebration of the poet’s 150th anniversary.

Mary Plunkett of Belgrave Private Press, who used letterpress in the printing process, said she was inspired by Yeats’s sisters, Susan and Elizabeth (Lily and Lolly), who a century ago printed the poet’s work in their Dublin company Cuala Press.

The books were hand-bound in goatskin at the Ox Bindery in Tubbercurry, Co Sligo, by Benjamin van de Wetering, a restorer of old manuscripts and books who did all the sewing and cutting by hand.

“Typically you would use calfskin, as we are a bovine-eating country, but goatskin is a better quality. And, aptly, the covers are green,” he said.

The poems presented to President Obama and vice-president Biden were chosen by Senator Susan O’Keeffe, chairwoman of Yeats 2015, and Prof Margaret Mills Harper, director of the International Yeats Summer School, who said she could not think of “a more appropriate gift”.

Ms Plunkett, whose grandfather George Plunkett fought in the GPO in 1916 alongside his more famous brother Joseph and a third brother Jack, said she was thrilled to be involved in the project.

“I have a workshop at the end of the garden – I have two treadle presses I operate by foot,” she said. Having already hand-printed a limited edition of Eveline, a story from James Joyce’s Dubliners, she says she is hoping President Obama likes the gift.

“I more or less worked solid on it during January and February. I hope he is happy with it,” she said.