Taoiseach roundly praised by supporters at dinner in Castlebar 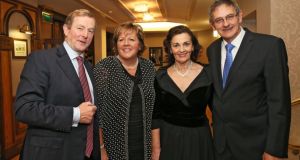 More than 400 of Taoiseach Enda Kenny’s closest constituency supporters gathered in a Mayo hotel on Saturday night for a dinner to celebrate the 40th anniversary of his election to Dáil Éireann.

Mr Kenny was in a reflective mood as he arrived for the sell-out function at Breaffy House Resort, Castlebar, with his wife, Fionnuala. Media questions about anything other than the event had been ruled out earlier by his handlers.

“This was an occasion”, he quietly told reporters, “to get together, reflect on the past, and where we hope to be in the future.”

Mr Kenny said he hoped guests enjoyed themselves. “It’s about the people really”, he said.”I just happen to be their servant”.

The Taoiseach’s low key, understated, approach. was continued afterwards in the banquet hall where, after a dinner whose main course consisted of beef or salmon, he gave a lengthy speech which was greeted with a standing ovation.

In the words of Pat O’Connor, Fine Gael press officer designate for the Mayo constituency in the general election: “There wasn’t even a mention of the latest favourable opinion polls. There was nothing triumphant in what he said. It was mostly about family, friends, his late parents and, of course, his loyal supporters”.

Holding back his emotions, Mr Kenny recalled his late father, Henry, Parliamentary Secretary to the Minister for Finance. His death in the autum of 1975 precipitated the by-election. The present Taoiseach successfully contested his late father’s Dáil seat.

Enda Kenny’s victory saved the then Taoiseach, Liam Cosgrave, whose Coalition Government held a slender majority, from having to call a general election.

Mr Cosgrave, now 95, sent an effusive message of congratulations to his young protégé which was read to the gathering on Saturday night.

“He (Taoiseach) deserves grateful thanks for his calm leadership as Taoiseach which has brought economic and social progress which we all appreciate”, the brief missive read.

Recollections of the keenly fought 1975 by-election which catapulted the then 24 year-old Kenny into national politics flew thick and fast amongst guests seated at 37 dinner tables.

Kathleen Coady, who later did secretarial work for the newly elected TD, recalled being in hospital at the time.

“That didn’t matter”, she explained. “I was brought from my hospital bed to vote”.

Henry Kenny, an elder brother of the Taoiseach, recalled to reporters the 1975 contest as being “horrendous” from an emotional viewpoint.

“In September we had lost our father. Two months later we were in the teeth of an election. It was tears all the way”.

Mr Kenny revealed that he had been considered instead of Enda to contest the election but had “passed the ball” on that opportunity.

Of that decision Henry Kenny now has no regrets. “I don’t think I would have been as successful (as Enda) or that it was for me. I have no regrets, none whatsoever”.

“I’m so thrilled that a 24 year-old whom we helped elect 40 years ago reached the top rung and is distinguishing himself in political office”, the retired shopkeeper beamed.

Arriving for the function, the Minister for Jobs, Enterprise and Innovation, Richard Bruton, representing the Government, said the Taoiseach’s 40 years as a Dáil Deputy was tremendous achievement.

“People will look back on the Kenny years as being very formative in putting the country back on its feet”, Mr Bruton predicted.

After the speeches, guests were entertained by comedian Frank Forde who performed uproarious sketches in which he mimicked President Higgins, Fianna Fáil leader, Micheál Martin, former taoiseach Liam Cosgrave and even the Taoiseach himself.

Guests danced until the early hours to the music of the Brose Walsh Band with the Taoiseach joining those on the dancefloor despite the fact he had to be away early yesterday (Sunday) to attend Remembrance Day ceremonies in the North.