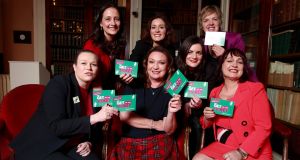 The outcome of the general election was a vindication of the introduction of gender quotas, a seminar on women in politics was told on Thursday night.

Senator Ivana Bacik said that the proportion of female representation in the Dáil had never risen above 16 per cent until February this year when women were elected to 35 seats, or 22 per cent of the total of 158 deputies.

The Labour Senator was speaking at the Women for Election campaign’s annual year in review panel discussion at the Royal Irish Academy.

More than 110 people attended the event which was moderated by Norah Casey and included representatives from all parties.

In Nordic countries, the proportion of women in parliament was 42 per cent, Ms Bacik said.

Ireland was a long way away from that but “we are getting there”, she added.

“We fought very hard for that gender quota legislation. The Bill became an Act in 2012,” said Ms Bacik. She said the legislation was controversial and there were still debates about quotas, but the election had proven that quotas could work.

It also coincided with the launch of a Women for Election campaign to encourage people to write to women who inspire them and encourage them to stand for election.

Ms O’Reilly said the debate on Independent TD Mick Wallace’s private members Bill on foetal abnormality was her high point of the year.

“We saw the very best of our parliamentarians and saw people who have divergent views were able to debate in a respectful way,” she said.

Asked about her “jobs for the boys” comment about Taoiseach Enda Kenny’s Cabinet, Ms O’Connell said he had promised that 50 per cent of Ministers would be women.

“He broke his promise as far as I am concerned,” she said.

Much of the debate focused on the defeat of Hillary Clinton by Donald Trump in the US presidential election, which many speakers described as a huge setback.

Ms O’Loughlin said the intervention of the FBI in the last weeks of the campaign was crucial.