Analysis: Varadkar strongest overall but went much of night not landing decisive blow 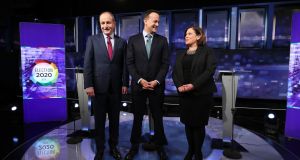 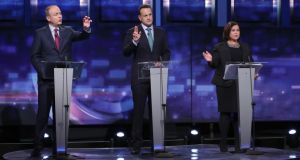 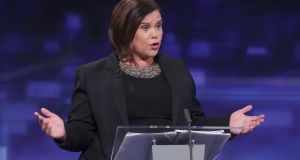 Up until the final minutes of the last debate between the main party leaders, there had been no decisive moment that had the potential to change the dynamic of the election campaign.

Leo Varadkar, Micheál Martin and Mary Lou McDonald had traded blows and insults, yet there was nothing that would stick in the memory or follow through to the final days of Election 2020.

Then, almost 90 minutes in, moderator Miriam O’Callaghan raised the murder of Paul Quinn, the 21-year-old from Cullyhanna, Co Armagh, who was brutally killed on October 20th 2007.

Paul’s mother Breege has in recent days raised comments made around that time by Conor Murphy, Sinn Féin’s finance minister in Stormont, and one of the most senior figures in the organisation.

“He came out publicly and called Paul a criminal on national television,” Mrs Quinn said this week of Murphy.

This was put to McDonald in an interview with RTÉ’s Bryan Dobson on Monday, and she responded that she did not think one of her key lieutenants had made such comments.

Prime Time had found the exact quote and read it back to McDonald.

Murphy said in 2007: “Paul Quinn was involved in smuggling and criminality. I think everyone accepts that.”

O’Callaghan read this to McDonald, who replied that she remembered “Conor being not quite as direct on that matter.” She was visibly shaken, adding: “Those things should not have been said.”

With Fianna Fáil and Fine Gael both trying to halt Sinn Féin’s momentum, it was a big moment.

In the final few minutes, the Sinn Féin leader, perhaps rattled, also came unstuck on her party’s climate change policies. “Massive means ambitious and substantial,” she said when pressed for specifics at one point.

She had earlier taken the scenic route to dealing with the question of whether she supports the Special Criminal Court: dealing with it, but not actually answering.

“I support the courts,” she said, while also repeating her view that the Special Criminal Court needed to be reviewed. “I believe that we need special powers.”

The Dublin Central TD was a late entrant to what was initially supposed to be a head-to-head between Martin and Varadkar, with RTÉ changing its position because of Sinn Féin’s surging poll figures.

It was well moderated by O’Callaghan and David McCullagh, who gave the leaders of the three parties time and space to answer questions and set out their positions.

McDonald was strong at some points, such as explaining her party’s position on a wealth tax, and weaker on others, such as her attempts to explain how Sinn Féin will build 100,000 new homes.

But she performed well on other housing issues, clearly outlining why her party thinks a rent freeze is a good idea, and once more stitching Varadkar and Martin together.

“These two men have been in government for the last four years,” she said.

This week’s Irish Times/Ipsos MRBI opinion poll had Sinn Féin on 25 per cent support, followed by Fianna Fáil on 23 per cent and Fine Gael on 20 per cent.

Varadkar, perhaps conscious that he was starting from behind, opened his debate performance by attacking both Fianna Fáil and Sinn Féin but a rushed delivery belied his nerves.

He improved as the debate progressed and tried to make the Fine Gael argument that “all change isn’t for the better”, instancing Brexit and the election of Donald Trump.

He was also successful in asking McDonald about the rates of homelessness, health outcomes and other issues in Northern Ireland, causing her to fall back and blame London and the Tories.

As in previous debates, Varadkar tried to hammer home his message that only Fine Gael can be trusted with the economy. He also tried wanly to raise Brexit, perhaps knowing that it has been a non issue throughout the campaign.

On health, another strong point was when he admitted that no-one really knows for sure when waiting lists will be cleared and his party was wrong to make promises on that front before.

Martin was the butt of probably the two best lines of the night – one from Varadkar saying bringing him back to power would be like bringing John Delaney back to run the FAI, and the other from McDonald asking if he was going to “mansplain” corporation tax to her – but he put in a competent and assured performance.

He spoke with empathy on the issue of housing, claiming – as his party does - that Fine Gael left too much to the market to figure out as the crisis worsened in recent years.

He also performed as someone confident in himself as the campaign draws to a close, and landed a hit on Varadkar by reminding the Taoiseach that he once said bringing more beds into the health system would ease pressure on staff and decrease productivity.

Martin’s attacks on Sinn Féin – that it “magicked up the figures” in its manifesto – also stung and his performance was calmer and more considered than previous debates. He also turned what was a weakness – a confused policy on a rent freeze - into a strength, by saying he would not be making unrealisable promises before entering government.

Both he and Varadkar were evenly matched throughout, although Varadkar probably pulled ahead as the night drew to a close.

Martin stumbled on who in his party had EU experience, citing himself, Éamon Ó Cuív and Brendan Smith. Varadkar was the strongest overall but went much of the night without landing the decisive blow that he needed.

Yet the moment when McDonald was told exactly what Conor Murphy had said about Paul Quinn is what will be remembered. Whether it halts Sinn Féin momentum and alters the course of the campaign is another matter.