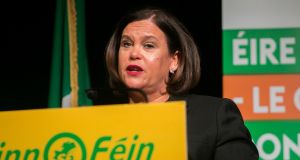 A new 5 per cent tax on people earning over €140,000, as well as other tax rises for those earning above €100,000, will form a key part of Sinn Féin’s manifesto, which will be published on Tuesday.

The party will also propose the establishment of a new standalone insurance fraud unit within An Garda Síochána, as well as increasing taxes on both investment funds and so-called vulture funds.

Mr Doherty has repeatedly raised the issue of insurance costs and it is set to feature prominently in the manifesto.

The proposed fraud unit would be funded “with reserves built up by the Personal Injuries Assessment Board”. Sinn Féin in government would also “introduce legislation to ban unfair pricing in the insurance market” and the party says insurance companies are using “big data to target loyal customers and vulnerable groups with artificially high premiums”.

It also says it would put “€230 million back in the pockets of policyholders by abolishing levies paid on non-life insurance policies, reducing premiums for consumers by 5 per cent”.

Insurance companies would also be forced to show the Central Bank how they set their prices and the Judicial Council would be properly funded as it establishes personal injury payout guidelines, Sinn Féin said.

The party would also make childcare a public service, thus guaranteeing “insurance cover for childcare providers under Irish public bodies, just like our schools and hospitals”.

On the issue of so-called vulture funds – private equity funds that acquired distressed mortgages and other assets – Sinn Féin would in government “end the sell-off of Irish wealth and property to vulture funds and international investors”.

“We will close tax loopholes that allow these funds to avoid paying their fair share and clamp down on vulture funds that are preying on distressed families and homes.”

The party wants to bring its “no consent, no sale” Bill – which seeks to make it illegal for banks to sell homes to funds without the consent of the mortgage holder – into law.

The dividend withholding tax for real estate investment trusts (REITs) and Irish real estate funds (IREFs) would increase from 25 per cent to 33 per cent. A 33 per cent capital gains tax would also apply “on all property disposals by REITs and IREFs”.

Commercial stamp duty would also increase from 7.5 per cent to 12.5 per cent “responding to a potential property bubble and encouraging our construction sector to focus its resources on house building”.