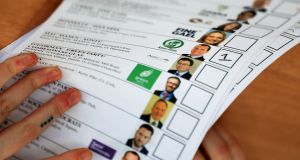 Transfers affected more seats than normal in the weekend’s general election because of the massive vote surpluses recorded by many Sinn Féin candidates.

Usually transfers affect between 8 per cent and 11 per cent of seats, but on this occasion some 13 per cent of the 159 seats up for grabs were altered by the excesses passed on in constituencies where Sinn Féin ran just one candidate.

While a number of counts were still ongoing on Monday night, the results of completed counts showed that transfers affected 21 constituencies, rather than the 11 initially estimated.

And, in a break from their regular pattern, many Sinn Féin voters transferred to other parties of the left rather than “plumping” or sticking solely to their own party.

In general, according to polling expert Sean Donnelly, two rules apply that between them account for 97 per cent of seats.

“Only 10 per cent of TDs are elected outside this rule, usually.”

Rule two is that a candidate must have at least half the quota on the first count.

“A half quota won’t guarantee you a seat, but if you’ve less than half you’ve no chance,” the polling expert added.

If both rules are applied, it generally accounts for 97 per cent of seats.

However, he said this election proved somewhat different “because of the big surpluses Sinn Féin got”.

“They were able to bring people across the line from a very low percentage,” Mr Donnelly said.

He had analysed the results to date and found 21 seats had been affected by a Sinn Féin surplus.

Sinn Féin itself lost out because of transfers in two constituencies.

Mythen’s surplus was some 6,200 votes and was spread across much of the trailing pack, with Ms Murphy benefitting to the tune of some 650.

The trend continued as the count went on, with the former Fine Gael byelection candidate receiving transfers from across the political divide, which Mr Donnelly attributed to waning interest as voters moved down the list of candidates while casting their ballots.

“Voters pay most attention to their first choice and maybe their second, but as they go further down they are less interested,” he said, adding that most voters do not go beyond four choices.

In Dublin Mid-West, Solidarity-People Before Profit TD Gino Kenny, who thought he was set to lose his seat, benefited from transfers when overtaking Fianna Fáil’s John Curran. It was a similar story in Dublin South-Central, where Independents4Change TD Joan Collins overtook Fianna Fáil Senator Catherine Ardagh.

It was a similar story in Donegal as Independent Thomas Pringle benefited from left-wing transfers to keep his seat while ousting Fianna Fáil’s Pat “The Cope” Gallagher.

In Dublin Central, transfers saw Gary Gannon of the Social Democrats past a city council colleague, Fianna Fáil’s Mary Fitzpatrick. It was a similar story for Solidarity’s Mick Barry in Cork North-Central, who saw transfers take him past Independent Ken O’Flynn.