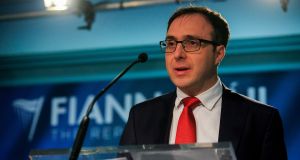 Robert Troy: Fianna Fáil TD has been party spokesman on a number of portfolios since he was first elected to the Dáil in 2011. Photograph: Gareth Chaney/Collins

One of the youngest members of the Fianna Fáil party, he has been a spokesman on a number of portfolios during his tenure as a TD, including transport, tourism and sport, business, enterprise and innovation and children and youth affairs.

His political priorities are supporting small enterprises, incentivising commerce in the community, reducing childcare costs for working parents and addressing the skills shortage particularly in the hospitality sector.

The former postmaster lives in Mullingar and maintains involvement with a number of local community groups including the North Westmeath Suicide Outreach Group, North Westmeath Hospice and Ballynacargy GAA club.