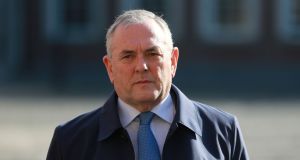 John McGuinness: The poll-topping maverick’s views are frequently out of line with the party leadership. Photograph: Nick Bradshaw

The man who put an early election firmly on the agenda with his comment that he would back a motion of no confidence if one was tabled against Minister for Health Simon Harris, John McGuinness (64) was always guaranteed to retain his seat.

The poll-topping maverick’s views are frequently out of line with the party leadership, including his view that Fianna Fáil should not rule out coalition with Sinn Féin.

A Carlow-Kilkenny TD since 1979, he was also a member of Kilkenny County Council from 1991 until the abolition of the dual mandate in 2003.

A controversial chair of the Public Accounts Committee from 2011 to 2016, he also served as minister of state for trade and commerce from 2007 to 2009 and for the duration of the last Dáil was chair of the Committee on Finance, Public Expenditure and Reform.

Married with a daughter and three sons, he is also an author and has written a political memoir The House Always Wins.

1 Coronavirus: Public urged to stick with ‘tough’ restrictions to allow phase two proceed next week
2 Trump turns to bible for photo op as DC burns around him
3 Luke ‘Ming’ Flanagan bares his bottom half to European Parliament
4 Covid-19: Easing of restrictions ‘unlikely’ to be speeded-up
5 Journalists in firing line as Trump inflames US protests
Real news has value SUBSCRIBE