Some Independents say they are willing to enter government 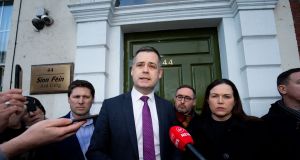 Mr Doherty said Sinn Féin will, in the first instance, focus on discussing government formation with the parties who have “received a mandate for change, and those discussions will start tomorrow.”

Political parties and Independents have begun setting out their red lines ahead of key talks on government formation in the coming days.

The Green Party met on Tuesday morning and agreed to talk to all other parties. A source said that “serious action on climate change and biodiversity loss” would be a red line for the party entering government.

The Social Democrats are also expected to meet as the focus turns to the shape of a new coalition.

A senior figure in Fianna Fáil said earlier on Tuesday no meetings are planned at the moment but this is likely to change over the coming hours.

A large number of Independents, speaking to The Irish Times, have now indicated that they are willing to enter government.

Newly elected Independent TD Michael McNamara has said that it is “incumbent on those who have been elected to try and put together a government that would be stable for a certain period of time”.

He said he would not rule out any parties and that he would make the “overconcentration in development in Dublin, which happens to the detriment of the rest of the country”, a priority.

Cork South-West Independent TD Michael Collins said the situation was “very simple”, adding: “My door is open to talking to everyone and anyone and I will rule out nobody.”

He said he will insist on a new and dedicated ministry for fisheries if in government.

He also said he wants to see a rural resettlement programme and that he would “not support any crowd” that has a role in a potential downgrading of Bantry hospital.

Galway West Independent TD Catherine Connolly said she would be aligning herself with the Independents 4 Change group along with Joan Collins and Thomas Pringle. She said she has “always been open to serving in government” but that it must address the need to build public housing on public land.

She said she would “certainly” serve in a government with Sinn Féin if the numbers were there.

She said that the next government must not “pay lip service” to climate change and must take significant action.

'Open to all offers'

Galway East Independent TD Seán Canney also said he is “willing to play a part in government, I would be available and would talk to all parties if they want to talk to me”.

He said he will insist that the National Broadband Plan is fully rolled out as a red line.

Donegal Independent TD Thomas Pringle said he would serve in a government of the left, but would not play a role in any government which involves Fine Gael or Fianna Fáil.

Peadar Tóibín, Aontú leader and Meath West TD, also said that he had contacted about five Independents in a bid to find a “common platform” to negotiate a place in a coalition.

Peter Fitzpatrick, who was re-elected as an Independent TD in Louth after resigning from Fine Gael in 2018, said that he was “open to all offers” and that he was “a listening person.”

“I will do what I can to do what is best for my constituency,” he said.

Mr Fitzpatrick said that he hoped that a government was formed that would create “a bit of stability with Brexit coming down the road and everything else - there is a lot of uncertainty.”

On Tuesday evening, Mr Doherty suggested that Fianna Fáil “have shifted their position and are now open to discussing with Sinn Féin and they have realised this election has changed everything.”

“Our first job of work is to reach out to those parties who have recieved a mandate for change... but we’ve made it clear we will be discussing with all political parties,” he said outside the Sinn Féin headquarters in Dublin.

“It’s about reflecting the views of the public; the public have said very clearly, to the entire political system that they want change from the broken systems of the past, the Fine Gael domination, and Fianna Fáil.”

He said the party had no red lines on ministries it had targeted, and had not decided its position on drawing full salaries. “The position from Sinn Féin is we would like to see TDs, Senators and Ministers’ salaries cut.”

“That’s very much on the agenda, that’s very much part of our core message to stop runaway rents happening in this capital and right across the state. Not just having a freeze, but making sure there is a reduction on those rents.”

He said a deadline on talks is “not in our gift” but that there should be no delay on government formation. “We need to inject urgency on this.”

In an unprecedented election result, Fianna Fáil has secured 38 seats, just one ahead of Sinn Féin on 37 and three ahead of Fine Gael on 35.

The Green Party has increased its seats from three to 12 and the Social Democrats have tripled their seat count from two to six.

Solidarity-People Before Profit has five seats – partially thanks to sizeable transfers from Sinn Féin – while the Labour Party is returning to the next Dáil with six. Aontú has retained its one seat and there are 19 Independents.

The Dáil is scheduled to reconvene on Thursday, February 20th, but before then talks to form a government will intensify.

The prospect of a Sinn Féin-led leftist government looks uncertain despite claims from leader Mary Lou McDonald that she could yet be taoiseach.

A majority of 80 seats is needed to form a government.

Left-wing TD Richard Boyd Barrett on Tuesday played down the prospect of such a government.

The Dún Laoghaire TD, part of the Solidarity-People Before Profit alliance, said he doesn’t believe the numbers are there for a coalition of progressive parties.

“If you look at the numbers . . . it appears we don’t quite have the numbers,” he told Newstalk.

“We will explore what we can do in that regard, but looking at the raw numbers, it would seem we are short of a majority to be able to do that.”

Mr Boyd Barrett said he believed there would be discussions between Fine Gael and Fianna Fáil about a possible coalition and also between Fianna Fail, Sinn Féin and the Greens.

Ms McDonald has said her first preference would be to form a coalition involving neither Fianna Fáil nor Fine Gael.

The Sinn Féin leader indicated she will hold talks with Solidarity-People Before Profit, the Greens, the Social Democrats and Labour as well as Independents.

Former taoiseach and Fianna Fáil leader Bertie Ahern suggested there was a possibility of Sinn Féin forming a left coalition with like-minded Independents.

“I can’t see that being a success, but it could be,” he said.

“There is a sizeable number of rural Independents, probably a group of at least 10 who are like-minded enough, who got strong votes.”

Mr Ahern told Newstalk that over the last 30 years “new things come up” out of “Dáil and election chaos”.

On the possibility of a Fianna Fáil/Sinn Féin coalition, Mr Ahern said he didn’t think there would be a “a sizeable number of Fianna Fáil people” who would have an appetite for it.

Sinn Féin’s Matt Carthy said the “numbers are going to be tight” in the party’s efforts to forge an administration without Fine Gael and Fianna Fáil but said “we have an obligation” to talk to the left-wing parties first over the coming days.

Sinn Féin has had no contact with either Fianna Fáil or Fine Gael at this stage, the Cavan-Monaghan TD told RTÉ Radio 1.

Fine Gael’s outgoing Minister of State for European Affairs Helen McEntee said the “onus is on Mary Lou” to try and form a government.

Despite her stated preference, Ms McDonald has said that “of course” she intended to talk to Fianna Fáil and Fine Gael about the possibility of government formation. Both parties had previously ruled out working with Sinn Féin after the election.

She said that the question of a rotating taoiseach would be “part and parcel” of any negotiations with the other big parties.

Fianna Fáil is deeply divided over whether it should seek a coalition with Fine Gael or with Sinn Féin.

A view has taken hold among party TDs that it should enter opposition and allow Sinn Féin to attempt to form a minority government.

Senior Fine Gael sources reiterated the view that they would not consider entering government with Sinn Féin, with some senior figures favouring a spell in opposition for the party after nine years in government.

Some party sources said a coalition with Fianna Fáil could come on to the agenda after some weeks if no other government was formed.