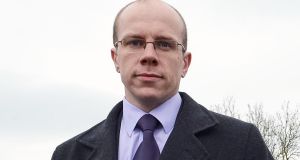 Sinn Féin councillor Darren O’Rourke topped the polls in the Meath East constituency in the 2020 election.

O’Rourke (39) ran in the 2016 election and was just behind Regina Doherty who claimed the third and final seat that year.

A native of Kells, O’Rourke now lives in Ashbourne and was successful in securing a seat in that electoral area in the 2014 local elections.

He is a member of a number of committees and groups within the council, including the special policy committee on planning and economic development, and the Dublin northeast regional health forum.

The married father of two’s political priorities were predominantly local with a specific focus on improving transport and infrastructure for Meath and ensuring the county receives a “fair” amount of Government funding, that “meets the needs of the population”.

He has a background in medical science, having trained in DIT, before completing several master degrees in Trinity College and the Royal College of Surgeons.