Election 2016: Can anyone stop Fine Gael? 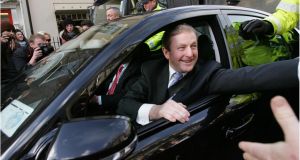 The headline story for 2015 and for the forthcoming election is undoubtedly the surge for Fine Gael – but the corollary of that is the repercussions for its rivals.

For Labour, the smaller Coalition party, some unexpected sparks have been uncovered as we have poked through the ashes – enough to rekindle the beginnings of a small fire.

Sinn Féin looks as if it has gone off the pace, but it’s not unduly concerned, as it’s involved in a marathon rather than a sprint. Likewise the Independents and the fringe parties. Their support was never realistically anywhere near the giddy 30 per cent suggested by polls in 2014, and those disparate individuals, alliances and parties will come nowhere near that in the general election. But they will make gains.

The big loser looks like being Fianna Fáil. The latest opinion poll puts it at 17 per cent. The party should outperform that – but, even then, it’s a dismal level of support that suggests the party has spent five years in a holding pattern. Its destination? Nowhere in particular.

Of all the parties it is struggling most to get its message across. In the two years after the 2011 election Fianna Fáil looked as if it was on the way back. Over the past two years it has lost its way. Its spokesmen – it has no spokeswomen – seem to have taken their eyes off the ball. The party can’t even make up its mind if it will fight the election as a potential party of government or as a prospective party of opposition.

Perhaps it’s not quite that bad. But if Fine Gael returns to government a big part of the next Dáil will be the battle between Fianna Fáíl and Sinn Féin, one struggling for survival and relevancy, and needing to rediscover its mojo, the other wanting to become the new Fianna Fáil – although Sinn Féin’s struggles with what are euphemised as “legacy issues” will continue to be a big drag factor.

Gerry Adams’s defence of Thomas “Slab” Murphy as a “good republican” in the run-up to Christmas was a reminder that the party continues to talk to two audiences. As long as it does that, it’s going to struggle to broaden its base.

Enda Kenny now looks fully justified in stepping back from the brink at the last moment in October and plumping for a spring rather than a November election.

The trend of all opinion polls is clear. Fine Gael has been on an upward trajectory all year. It has jumped 10 points since December 2014, and there’s no indication that it is slowing down.

Already the election is being framed in one way: what other party or force can stop Fine Gael from securing an overall majority?

At least in Ireland, Fine Gael and Labour were there to offer occasional alternative governments. But with such momentum behind Kenny and his colleagues, are we looking at a new party to dominate the Irish electoral landscape for a generation?

Already Fine Gael has taken over the mantle once held by Fianna Fáíl: it has assumed the role of the natural party of government.

The circumstances are different from 2011. The ship has been steadied. The economy is growing. Sure there are crises, in housing, in health and in Irish Water. All are out-trumped, though, by the ace card up the Government’s sleeve: the burgeoning economy.

At 31 per cent, the party looks poised to repeat its performance in 2011, when it took 36 per cent of the vote.

In January people will begin to see the good news from the budget – a decrease in the universal social charge, for example, and increases in child benefit – filter its way into their income. It won’t be a huge amount, but it will add at least a little heat to the feelgood glow that is increasingly evident.

Political fates rest on the state of the public mood. It’s hard to measure, but there’s no doubt that the mercury of the moodometer has been steadily rising over the past year.

Fine Gael has a bit of a quandary. It’s not sure if it will get an overall majority. If it fails to do so, its first port of call for support will be the Labour Party. It needs to keep its Coalition partner sweet.

And the most plausible explanation for why Kenny did not call a November election was that Labour was virulently opposed, calculating that it came too soon for it to put up a biddable defence on the doorsteps.

Fine Gael can’t overtly target Labour seats, but it does know that if it is to win an overall majority it will need to take final seats from its Coalition partners. To do that the party will need to zero in on marginal and vulnerable Labour seats, as the Tories did with the Liberal Democrats in last year’s UK general election.

That will require a sangfroid that the softer Irish political class might find hard to muster – but it won’t stop Fine Gael seeking an overall majority.

And for the others the question is: who is going to shin up a lamp post, like Michael McDowell did in 2002, with a poster that says: “One-Party Government? NO thanks!”

The election will be decided for the most part by the destination of the final seat in three- and four-seat constituencies and by the final two seats in many five-seaters.

A small swing further towards Fine Gael between now and the election could see the party reap a bonanza from those final seats. That would be an extraordinary achievement, given that Fine Gael was the biggest sufferer of the reduction in the size of the Dáil, probably losing six of the eight seats.

It is premature to talk of a landslide like Fianna Fáil’s in 1977. Two months remains: plenty of time for “events” to occur or for Fine Gael to shoot itself in the foot.

Fianna Fáíl will undoubtedly make gains. On a good day it could double its seats from the current 20, but 35 is a more realistic target.

For Sinn Féin 30 TDs is the magic number, making it strong enough to breathe down the neck of its quarry. Independents could play a crucial role if Fine Gael is close to the magic number of 79.

None of the smaller parties will go beyond single digits, with the possible exception of the Shane Ross alliance of Independents.