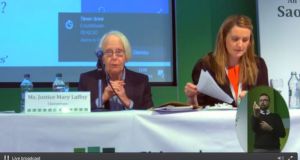 A screengrab from Saturday’s meeting of the Citizens’ Assembly in Malahide, Co Dublin

The Eighth Amendment is not “satisfactory or helpful” for women who experience unplanned or crisis pregnancies, the first full meeting of the Citizens’ Assembly has heard.

The comments were made by Irish College of General Practitioners (ICGP) council member Dr Brendan O’Shea in his presentation to the assembly on clinical practice in Ireland.

Dr O’Shea added that the provisions of the Protection of Life During Pregnancy Act 2013 are either ignored or are found to be “cumbersome, stressful and difficult” by GPs, pregnant women and their partners.

He said women from poorer backgrounds who may be inclined to seek abortions abroad are often prevented from doing so due to the prohibitive costs involved.

This “adds to the sense of suffering” for many women, according to Dr O’Shea, who said “inequality is writ large across most aspects of our health service, and this area of care is no exception.”

In his presentation, Prof John Higgins of Cork University Maternity Hospital said the parts of the act that deal with physical illness “appear to be working”, but said the part regarding suicide is “more complex”.

Prof Higgins guided the 99 assembly members through hypothetical examples of medical procedures that reflect real-life pregnancy complications experienced by women in an effort to augment their understanding of the decision-making process that applies in such cases.

He was followed by National Maternity Hospital consultant perinatal psychiatrist Prof Anthony McCarthy, who said six terminations were carried out under the act across 2014 and 2015 due to a risk to the life of the women by suicide.

He said that while between 11-13 per cent of pregnant women may experience depression at some stage, very few feel actively suicidal and express a desire to die, which are among the grounds of consideration for a termination under the act.

Fears that huge numbers of pregnant women would try and “fool” clinicians into granting abortions by threatening suicide have not been borne out in real life, according to Dr McCarthy.

“I remember when this legislation was being drafted there were beliefs somehow that women all over the place would be presenting to psychiatrists saying they’re all suicidal, and fooling psychiatrists… That simply has not happened. It was never likely to happen,” he added.

Janice Donlan from the State-supported Crisis Pregnancy Programme told members that 3,451 women travelled from Ireland to the UK for abortions in 2015, down from 6,673 in 2001, but indicated that more women now appear to be seeking information on mail-order abortion pills.

Both she and Dr O’Shea expressed concerns about crisis pregnancy counselling services that “target” women seeking information on abortions, pressuring them into taking certain courses of action and employing “delaying tactics”.

In the morning session, assembly chair and serving Supreme Court judge Ms Justice Mary Laffoy said the Eighth Amendment is a “complex and contentious” topic of discussion that will require a “reasoned, sensible and compassionate approach”.

The first four weekend meetings of the assembly, which is comprised of 99 members chosen from the general public and chairwoman Ms Justice Laffoy, will focus solely on the issue of abortion.

Assembly members will hear submissions on the Eighth Amendment from legal and clinical experts as well as advocacy groups over four weekends between November and early March.

They are then expected to vote on at least one motion relating to the Eighth Amendment during the last weekend session devoted to that topic in March, the results of which will then be reflected in a report submitted to the Oireachtas for its consideration next year.

The aim of the assembly’s opening day on Saturday was to copper-fasten members’ understanding of the State’s current legislation regarding abortion and its practical implications, and there will be a further presentation on ethics during a half-day session on Sunday.

Coronavirus: Ireland plans for massive increase in tests 13:54
What is coronavirus and what should I do if I have symptoms? 13:54
Supreme Court restores 10-year jail term for man who raped his wife 12:45
Coronavirus: Italy-Ireland match is called off, IRFU confirms 14:41
Snow and ice forecast in northwest as flooded roads remain closed 08:40