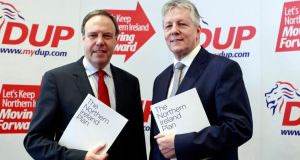 Democratic Unionist Party leader Peter Robinson has said his party would work with the Conservatives or Labour in the event of a hung parliament following the British general election in May.

Mr Robinson made the comment after revealing his party’s ‘Northern Ireland Plan’ at a DUP policy conference at the weekend.

The First Minister told the BBC’s Andrew Marr Show on Sunday he would first speak with whichever party secured the greatest number of seats but would explore options based on who offered the best deal for Northern Ireland.

Mr Robinson explained the DUP five point plan for negotiations in the event of a hung parliament aims to:

* Create a society based on fairness and opportunity for everyone

* Strengthen the United Kingdom and protect and enhance British identity

Earlier this month he announced the DUP had made an electoral pact with the Ulster Unionist Party (UUP) to target seats, the abstentionist Sinn Féin party hold in the North or are in the running for, in an effort to maximise unionist representation at Westminster.

The DUP will encourage its supporters to vote for UUP candidates Tom Elliott in Fermanagh South Tyrone and Danny Kennedy in Newry and Armagh, which are seats currently held by Sinn Féin’s Michelle Gildernew and Conor Murphy.

In return the UUP will urge its voters to support the DUP candidates in East Belfast (Gavin Robinson), the seat Mr Robinson lost to Alliance Party deputy leader Naomi Long in 2010, and North Belfast (Nigel Dodds), where Sinn Féin’s Gerry Kelly is hoping to be elected.

Following suggestions from other Stormont parties the pact is sectarian Mr Robinson told Andrew Marr “there isn’t anything sectarian about unionism”.

Mr Robinson has also blamed Sinn Féin for the ongoing political impasse at Stormont following its decision to withdraw support for the Welfare Reform Bill.

But Michelle Gildernew has accused the DUP of “pre-election bluster”, adding that this was no substitute for “the serious work needed to implement welfare protections for the most vulnerable in society”.

“No amount of pre-election bluster from Peter Robinson is a substitute for bringing forward the schemes necessary to implement the Stormont House Agreement,” Ms Gildernew added.

The UUP also held a Spring Conference at the weekend.

UUP leader Mike Nesbitt told delegates the electoral pact with the DUP was the “best possible” arrangement and was in the “best interests of Northern Ireland” come May 7th.