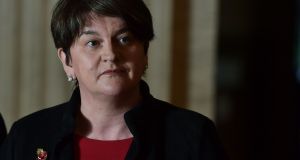 No one is above the law, the DUP leader said on Wednesday evening following Sinn Féin criticism of the arrest of Mr Downey in Co Donegal on Monday.

At the brief court hearing Det Sgt Jim Kirwan, of the Garda Extradition Unit, told Ronan Kennedy BL, for the State, that he arrested Mr Downey on foot of a warrant and cautioned him. In reply, Mr Downey told the detective “I’d say it was the DUP and not the DPP” who decided to pursue the matter, Det Sgt Kirwan said.

Counsel for Mr Downey, Garnet Orange SC, said his client would be contesting the application to surrender him and was “very anxious” to secure bail. He said Mr Downey had medical conditions and recently had a pacemaker fitted.

Ms Justice Aileen Donnelly said she was satisfied the person before her was the person to whom the warrant related. She fixed November 23rd as the date for the full hearing of the extradition case and remanded Mr Downey in custody to that date.

In 2013 Mr Downey faced charges over the IRA 1982 London Hyde Park bombing in which four British soldiers were killed. But that trial collapsed in 2014 when it emerged he had an official letter stating that he was not wanted in connection with the attack. Mr Downey had denied involvement in the bombing.

The Sinn Féin policing spokesman Gerry Kelly described Mr Downey’s arrest on Monday as “vindictive” and “an act of gross bad faith by the British government”.

Ms Foster said a key principle of democracy was that justice was blind. “No one is above the law and everyone is equally subject to it. Indeed, everyone is innocent until proven guilty,” she said.

She noted Mr Kelly’s criticism and how Donegal TD Mr Doherty said the arrest was “out of order”.

“This is incredible,” said Ms Foster. “There is nothing ‘out of order’ or ‘vindictive’ about allowing the independent prosecution service to go about its work. Innocent victims have waited for forty years for justice yet Sinn Féin has not a single word for those grieving families,” she added.

“Of course all arms of justice are not above criticism but the objection of Sinn Féin to the Downey arrest relates to his on-the-run side-deal with Tony Blair. That side-deal was a corruption of justice,” she said.

“Being ‘a friend of the peace process’ or having a grubby secret letter should not allow anyone to escape justice for taking innocent life,” added Ms Foster.

A Sinn Féin spokesman said: “It’s rich for Arlene Foster to be lecturing anyone about respecting the independence of judicial and legal processes when the courts found that she acted unlawfully in blocking the Lord Chief Justice’s legacy plan. A move which denied truth and justice to victims of the conflict.”