DUP and Sinn Féin accused of ‘abdication of responsibility’ over Brexit

Absence of Stormont institutions is a ‘disgrace’, claims Lisa Chambers 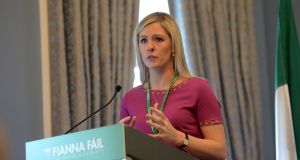 Lisa Chambers accused the DUP of willingly ensuring that Stormont institutions are kept suspended because it suits the party’s agenda at Westminster. Photograph: Dara Mac Donaill

DUP and Sinn Féin’s conduct in relation to Brexit is a “disgrace”, Fianna Fáil TD Lisa Chambers has said.

Ms Chambers, the party’s spokeswoman on Brexit, accused both parties of an “abdication of responsibility” in collapsing the Stormont institutions over the past 20 months.

Speaking at the Parnell Summer School on the theme of ‘21st Century Democracy: Opportunities and Threats’, she said it was “remarkable” that the voices of Northern Ireland politicians were not being heard on Brexit.

She pointed out that the only Northern Ireland representatives in Westminster are the DUP who are pro-Brexit, even though the majority of people in the North voted for the UK to remain in the EU.

She accused the DUP of willingly ensuring that Stormont institutions are kept suspended because it suits the party’s agenda at Westminster and she said Sinn Féin was playing into its hands with its abstentionist policy.

“These MPs matter all the more because since that disastrous snap election that Theresa May called where she lost her majority, their numbers are currently keeping May’s government in power,” she said.

“The collapse of power-sharing in Stormont, with no imminent sign of its return, further adds to the imbalance in Northern Ireland’s democratic voice.”

She accused the Government of “megaphone diplomacy” in relation to the backstop agreement that followed in the aftermath of the December agreement between the EU and the UK.

There it was agreed that Northern Ireland would retain regulatory alignment with the EU if no deal could be reached between the EU and the UK.

She said it created unnecessary tensions in Anglo-Irish relations and among Unionists.

Speaking on the same platform at the Parnell School, former Siptu president Jack O’Connor, who will be a Labour party candidate in the forthcoming general election, said he too believed the Government had oversold the backstop arrangement agreed last December.

Mr O’Connor said in his experience of 42-years as a union leader, he had learned the dangers of overselling deals.

“The more you hype what you have achieved in negotiation, the more difficult it is for the people you negotiate with. The more you jeopardise the potential for the next agreement,” he explained. “This was a time for a more mature approach.”

1 Joe Biden does not want to see guarded Border in Ireland after Brexit
2 Shops, hairdressers and hotels expected to reopen next week
3 Bloomberg ranks New Zealand top in fight against Covid-19 - but how did Ireland fare?
4 Covid-19: Museums, cinemas set to reopen next week as Varadkar warns of New Year restrictions
5 Stir-crazy Dutch holidaymakers set to descend on Caribbean island
Real news has value SUBSCRIBE