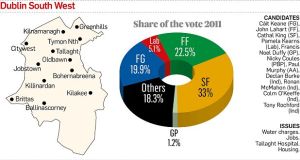 Dublin South West Constituency Profile: The numbers, and everyone working in the constituency, says the Dublin South-West seat is Sinn Féin’s to lose, despite some last minute uncertainty caused by the party being outflanked on its left.

A hitherto rare occurrence, but one we are more likely to see as the party and various candidates of the hard left hue compete for the same votes as the general election draws near.

In Dublin South-West, former MEP Paul Murphy of the Anti-Austerity Alliance spread the message in the working class areas around Tallaght, the constituency’s focal point, that Sinn Féin could not be trusted on water charges.

They would, he said, jettison their opposition to the charges in any post-general election coalition negotiations and could not be trusted.

Murphy’s campaigning style is blunt - his pitch during the European elections was that a vote to retain him as MEP would destabilise the Government - and Sinn Féin had clarify its position in response.

The abolition of water charges is now a “red line” coalition issue for Sinn Féin, and its byelection candidate Cathal King has claimed he will not pay his charges at all.

Those working on all sides say water is the defining issue on the canvass, despite other local concerns such as employment and ongoing concerns about Tallaght Hospital.

Sinn Féin has said housing and homelessness is also an issue, but others differ.

“It just doesn’t come up on the doors,” said one local activist from a different party. “It’s just a fact that homes and homelessness doesn’t register with people who answer their doors to you.”

Earlier in the campaign, Sinn Féin was criticised by the National Women’s Council of Ireland and campaign group Women for Election for choosing King over councillor Máire Devine.

King initially said he believed a female candidate should stand to promote gender equality but later changed his mind, claiming he was persuaded by colleagues to change his mind.

Despite these hiccups, if King, a councillor for a decade and a former mayor of South Dublin, follows through on the expectations placed on his shoulders, Dublin South-West will become the most left wing constituency in the country in terms of its Dáil representation, with two Labour TDs and two Sinn Féin deputies.

Sinn Féin sources say getting their vote out on the day will be important in ensuring they win they win, with turnout overall expected to be poor, possibly as low as 30 per cent.

The latest Irish Times/Ipsos MRBI poll supports what canvassers are picking up on the ground, with Sinn Féin on 26 per cent in the capital and 39 per cent in working class areas.

On those figures, Dublin South-West is almost the perfect constituency for the party: urban, and mostly working class, with an estimated third of homes coming from local authority stock, although it includes middle class areas like Templeogue and Terenure.

Sinn Féin is also the largest party on South Dublin County Council and, behind Independents and others on 37.5 per cent, took 22.5 per cent of the vote in May.

Ever since Brian Hayes announced he was leaving national politics to move to the European Parliament in Brussels, Sinn Féin has been readying itself to take the Fine Gael seat.

However, the byelection is likely to be the high watermark of left wing support and representation in the constituency. Come the general election, boundary changes see Dublin South-West increase from four to a five seater, with the addition of just under 40,000 votes from neighbouring Dublin South, mostly coming from middle class areas like Rathfarnam and Knocklyon.

Whoever wins the byelection could have some heavyweights moving into their patch, with suspicions that Minister for Communications Alex White and former minister for justice Alan Shatter could move from Dublin South, which will be gutted from five to three seats and renamed Dublin Rathdown.

Cáit Keane is carrying the Fine Gael flag for the byelection, and Pamela Kearns is the Labour candidate but both could find themselves on the sidelines come the general election in 2016.

Fianna Fáil’s John Lahart is seen as having performed well in the campaign, and put in steady performances in two televised debates. However, those at the top of Fianna Fáil say theirs is a medium term plan with 2016 in mind, and the goal of gaining back one of the seats they previously held here with Conor Lenihan and Charlie O’Connor.

Another strong candidate is Independent Ronan McMahon, a former Fine Gaeler supported by Lucinda Creighton and the Reform Alliance. His father, Larry McMahon, served as a a Fine Gael TD in the constituency, as well as a party senator, while the Greens are standing Francis Noel Duffy.

However, despite suspicions about how transfer friendly Sinn Féin will be, King is likely to have enough first preference votes to comfortably see him through.