No increase in €1bn fiscal space and no extra cash to bail out departments, says Minister 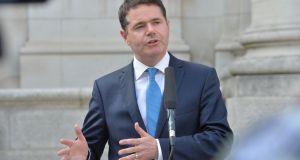 Minister for Public Expenditure Paschal Donohoe: He insisted that the fiscal space available for the Budget will remain at around €1 billion, to be divided on a 2:1 ratio between public spending increases and tax cuts. Photograph: Alan Betson

There will be no increase in the €1 billion of fiscal space before the Budget, and Government departments will not be bailed out at the end of the year with extra cash, Minister for Public Expenditure Paschal Donohoe has told the Oireachtas budget scrutiny committee.

Mr Donohoe was addressing the new Dáil committee – formed during the summer to explore options for the Budget – in Leinster House on Wednesday, three weeks before he and Minister for Finance Michael Noonan deliver the Budget and spending estimates for 2017.

Faced with many suggestions for increased spending from committee members, Mr Donohue maintained his hard line on spending increases, repeatedly insisting that while all the requests were justifiable in themselves, he had to reconcile them with the need to stay within expenditure targets laid down by the EU’s fiscal rules.

He insisted that the fiscal space available for the Budget will remain at around €1 billion, to be divided on a 2:1 ratio between public spending increases and tax cuts, though the Fiscal Advisory Council estimates that the overall size of the Budget package will be some €2.4 billion, when increases in spending for 2017 that have already been committed to are included. There would be no supplementary estimates this year, he stressed.

Green leader Eamon Ryan said more funding should be devoted to public transport and promoting cycling and walking. He called for a change of focus in the department towards environmentally sustainable economic development on a similar scale to that effected in the 1960s by Ken Whitaker and Seán Lemass.

Fianna Fáil TD Lisa Chambers said there was a need for extra funding for third-level education, while Joan Burton called for more funding for childcare and for school construction, which was being “long-fingered”, she said.

Independent TD Stephen Donnelly outlined a number of areas that he said the Minister should consider for additional resources: voluntary sector workers needed pay restoration, he said, funding for the arts should be maintained and small business supports should be enhanced in the light of the Brexit referendum.

“Of course the arts community want to keep the €50 million next year. Of course they do. But I have to reconcile all the other demands before me,” he said.

Richard Boyd-Barrett of People Before Profit said that not spending in certain areas – housing, third-level education and forestry were examples he gave – was “not prudent – it’s stupid”.

“It’s a stupidity being imposed on us by the fiscal rules,” he said.

Mr Donohoe’s answers remained largely the same: these are all good ideas, but I have to make them all fit into the fiscal space of available resources. And that, he indicated, would be completely impossible. Last week The Irish Times reported that Mr Donohoe had told the cabinet that the aggregate requests for new funding from his cabinet colleagues for next year had hit the €3 billion mark.

Even if there were no fiscal rules, he said, “we would still have to live within tax revenues from this year and next year and what we can borrow.”