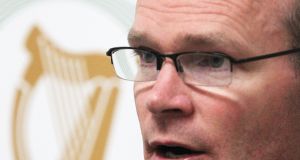 Minister for Foreign Affairs and Trade with Special Responsibility for Brexit Simon Coveney: “What we are insisting on achieving is a special status for Northern Ireland that allows the interaction on this island as is currently the case to be maintained as close to the current norm as possible,” he said. Photograph: Stephen Collins/Collins

Minister for Foreign Affairs Simon Coveney has said an all-island approach to Brexit would help bring about “special status” for Northern Ireland and an “invisible” border with the Republic.

The deputy leader of Fine Gael promised his approach would not be party political and cautioned against using language that could “trigger political sensitivities” and damage efforts to secure a positive outcome in negotiations on the United Kingdom’s departure from the European Union.

“What we are insisting on achieving is a special status for Northern Ireland that allows the interaction on this island as is currently the case to be maintained as close to the current norm as possible,” he said.

“So it’s not so much about a hard or soft border, it’s about an invisible border, effectively, that you don’t notice if you cross in terms of either physical barriers or indeed other barriers.”

Mr Coveney was speaking at the launch in Leinster House of a report looking at the “psychological” impact of Brexit produced by the cross-party Belfast Agreement committee.

“I think it would be very helpful if we had an all-island approach to Brexit. It would provide a lot of clarity for the EU negotiating team and I think it would impact quite significantly on the British government’s approach also,” he said.

Mr Coveney, who was given special responsibility for Brexit by Taoiseach Leo Varadkar in last week’s Cabinet reshuffle, said the European Commission’s chief Brexit negotiator Michel Barnier “cares about Ireland” and wanted to find a solution that would protect the peace process and the Belfast Agreement.

“There are two sides to this negotiation, so simply making demands isn’t good enough. We have to make arguments and win those arguments and be persuasive enough to be able to get buy-in from the British government side as well,” he said.

Mr Coveney said the lack of a Northern Executive at present meant the parties and the population of Northern Ireland were relying on others to make their case in the context of Brexit, which was not a satisfactory situation.

A big element of the efforts to get the Executive up-and-running next week was the realisation there were hugely important negotiations under way elsewhere, not only in London but in Brussels in particular, he said.

“The one thing I would caution is that we need to be a little careful of the language that we use in terms of what we call the final outcome before we get an agreed position because that does sometimes trigger political sensitivities that would make a final outcome even more difficult.”

Committee chairwoman Kathleen Funchion of Sinn Féin said Brexit was already having a “psychological impact” in the Border region in particular.

She said the Belfast Agreement provided a “clear pretext” to allow European Union Peace and Interreg funding programmes to continue.

“The scale and importance of these programmes cannot be overstated. A solution for successor programmes must be found.”

Ms Funchion said urgent clarity was required on how a “seamless and frictionless Border” as referred to by the British government might be possible in the scenario of a UK departure from the single market and customs union.

“A tailored solution, taking into account the very unique circumstances on the island of Ireland is required,” she said.