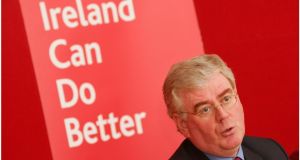 Outgoing Labour Party leader Eamon Gilmore. On the basis of its performance at the weekend, Labour will be back in opposition as a weakened force after the next election. Photograph: Bryan O’Brien

The Labour Party is facing one of the most daunting challenges in its 102-year history following the meltdown in the local and European elections but it is a bit early to start writing the party’s obituary.

Back in 2002, the conventional wisdom was that Fine Gael was headed for the political scrap heap after the worst general election result in its history but by 2009 it had become the biggest party in local government across the country before repeating the trick in the subsequent general election.

In the 2011 general election, Fianna Fáil suffered the most catastrophic defeat in its history but it confounded all the prophets of doom at the weekend by emerging once more as the biggest party at local authority level.

The political obituary writers have now turned their attention to Labour after a truly appalling election result but, as the example of Fine Gael and Fianna Fáil has shown, party loyalty is an enduring feature of Irish politics and one that is underestimated by many pundits. Prospects look grim

That is not to minimise the task facing the new Labour leader because the prospects do truly look grim and the scale of the challenge it faces is probably greater than ever before.

In the past, Labour suffered an electoral mauling at regular intervals after periods in government and was able to recover its strength on the opposition benches before the whole cycle repeated itself.

Dick Spring and Eamon Gilmore were able to build up Labour’s strength in opposition by mounting more effective attacks on the government of the day than other political leaders.

With the emergence of Sinn Féin, it is facing a highly organised and ruthless competitor in the Dáil and outside it.

On the basis of its performance at the weekend, Labour will be back in opposition as a weakened force after the next election, competing for attention with a much stronger Sinn Féin.

Even if it manages to recover some ground, it can hardly avoid losing a swathe of seats in Dublin, particularly those in working-class areas. Seats in constituencies like Dublin Central, Dublin West and Dublin Bay North are in real danger.

It is the same story in Cork city, where the party doesn’t have a single councillor and if the same voting pattern is repeated in the general election, it won’t have a single TD in the city after the next election.

It has a better chance in more middle-class constituencies, as evidenced by its solid performance in Dún Laoghaire Rathdown council, and it might hang on in commuter belt areas like Kildare and Wicklow.

When disaster struck in the past, the party managed to cling on in predominantly rural constituencies like Carlow-Kilkenny, Wexford, Tipperary, Meath and Kerry and the same may happen next time around

Labour’s problem throughout its history is that its vote in Dublin has fluctuated wildly from one election to the next. Going into government has always proved damaging for the party but the alternative of staying in opposition indefinitely has never proved an attractive option for a majority of TDs. No electoral thanks

ent on social welfare but got no electoral thanks for its trouble.

The immediate challenge facing the new leader will be how it can improve its electoral prospects between now and the general election. The party has to get more than 7 per cent of the vote in the next election to have any prospect of regrouping in opposition, never mind remaining in government for a second term.

It should not be forgotten, though, that the local and European elections were a mid-term verdict in a time of austerity. Sinn Féin, like Ukip in Britain, managed to harness the mood of hostility to the establishment and get people out to vote who don’t normally participate in elections.

While the overall share of the vote obtained by Sinn Féin in the local elections was a very respectable 15 per cent it was still around five points lower than its consistent standing in opinion polls. Vented frustration

The turnout in last Friday’s elections was just a

bout 50 per cent and a number of Labour and Fine Gael candidates reported that some of their supporters vented their frustration at the government by not turning out.

The economic situation is improving steadily and both government parties can at least aspire to capitalising on that and getting more people out to vote. They also need to really focus on the kind of policies that Sinn Féin and the various Independents are offering. Those policies have received very little scrutiny from the media so Labour will need to take on the job itself.

One way or another, the next election will be a do-or-die affair for Labour. The timing of the contest and the issues on which the campaign is fought will be vital for the party’s survival.