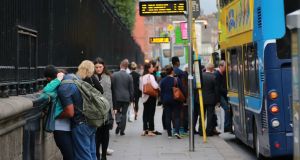 Declarations by a top civil servant that people with free travel passes should not be able to use public transport at peak times were “incendiary”, a Dáil committee was told. Photograph Nick Bradshaw

Moyagh Murdock, chief executive of the RSA, told the Oireachtas Transport Committee that gardaí equipped with instant access to drivers’ records would do most “to reduce death and injury on our roads”.

Gardaí in Limerick are successfully trialling a smartphone app that allows them to check up on a driver’s record instantaneously, including motor tax, penalty points etc.

During six months of tests, however, gardaí using the Limerick app have found that detection rates for all motoring offences in the region have improved.

Meanwhile, declarations by a top civil servant that people with free travel passes should not be able to use public transport at peak times were “incendiary”, the committee was told.

Secretary general of the Department of Public Expenditure and Reform Robert Watt said this week there was a need for a debate on how infrastructure, including public transport, was priced and used.

Public transport is increasingly full between 7.45am and 8.25am, he said, adding that there are “issues about enabling people to access public transport for free at peak times”.

Chairman of the Oireachtas Transport Committee, Fine Gael TD Fergus O’Dowd, said he would write to Mr Watt expressing “serious concern” about his remarks: “The answer is no, Mr Secretary General.”

Saying the remarks were “incendiary”, Independent Senator John Dolan said Mr Watt’s comments were “not helpful” and “not respectful”, while Solidarity TD Mick Barry said there is “no way” that such curbs would be accepted.

Saying that she had no plans to change the rules, National Transport Authority chief executive, Anne Graham said funds for the free travel scheme have not increased since 2010, but the number of qualifying passengers has increased.

Meanwhile, the NTA told the committee it will compulsorily purchase gardens and other property, if necessary, to construct its €2 billion high-speed bus routes in Dublin.

Last week, the NTA published plans to build 16 new bus lane routes in and out of Dublin city that would see up to 1300 homes or businesses losing part of their property.

Meanwhile, it is “likely but not certain” that the NTA will alter the Metro Link project to remove the need to operate a tunnel boring site on grounds currently used by the Fianna GAA club in Glasnevin in Dublin.

The Metro Link project involves the development of an underground railway service linking areas between Swords and Sandyford at an estimated cost of €3 billion.

The current plan proposes two tunnels, and requires the use of the grounds of Na Fianna, a GAA club with more tha 100 teams and approximately 3,000 members, for nearly six years.

However, after a public consultation process which received some 8,000 submissions, the NTA is considering boring one tunnel, not two – which would remove the need for the Na Fianna lands.