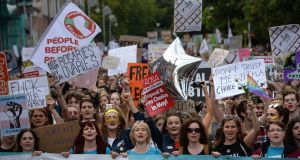 The absence of leading Sinn Féin personalities – or the party’s banners – from the March for Choice in Dublin in September was striking. Photograph: Dara Mac Dónaill

Thousands of people took part in the March for Choice in Dublin in September, a protest that was filled with banners of all types, but mostly from parties of the declared left.

Solidarity and People Before Profit were prominent. So, too, were the Labour Party, the Greens and the Social Democrats. However, the complete absence of leading Sinn Féin personalities, or, indeed, the party’s banners was striking.

The absence provoked a storm of criticism from Repeal the Eighth campaigners, led by veteran republican Bernadette McAliskey, who said she had “a message for Mary Lou McDonald”.

“You had better be absolutely and unequivocally behind the campaign to repeal the eighth amendment or [you will never be in power],” McAliskey told the rally.

Later, a Sinn Féin official said the march “goes beyond the party position”, adding: “We are in favour of repealing the eighth amendment. Our position on [what replaces the current prohibition] does not go as far as the rally organisers.”

Abortion has proved to be a political Achilles’ heel for Sinn Féin, dividing it in the manner that has happened in wider society. Its older, rural supporters tend to oppose change; its younger and urban supporters tend towards pro-choice.

Internal debates have been impassioned and divisive. In Derry, it agreed that the eighth amendment should be repealed, allowing for abortion in some circumstances including rape, incest and fatal foetal abnormality.

It was a change, but a limited one. Electorally, that might have consequences for the party, particularly in the battleground constituencies of cities, where it is vying for seats with smaller left-wing parties.

Solidarity-People Before Profit, meanwhile, has been unequivocal, unashamed and militant in its pro-choice stand, favouring abortion on request up to 12 weeks. In particular, it portrays itself as the only pro-choice party.

In reality, the positions of the Social Democrats and Labour are not that far away from Sinn Féin’s – repeal and then circumscribed changes in abortion laws, but Sinn Féin’s has attracted more attention.

I am concerned that where the right to life is not constitutional there can be a slide to laws that exist in Britain, Iceland, the Netherlands and in Denmark

“The organisers of the march recognised that people were coming from a variety of positions but all were united in wanting the eighth repealed,” said Ann Marie McNally of the Social Democrats.

Sinn Féin’s quandary on the issue can be seen in the polar opposite views of some of its leading representatives. Its Meath West TD Peadar Tóibín does not support repeal.

“I am concerned that where the right to life is not constitutional there can be a slide to laws that exist in Britain, Iceland, the Netherlands and in Denmark which mean that some unborn children with certain disabilities, gender or economic backgrounds are aborted,” he said.

He was also critical of the Dáil committee. “I would have preferred if the numbers were balanced, both in membership and those making presentations to the committee,” he said.

Tóibín has called for a conscience clause on this issue within the party.

Rathfarnham councillor Sarah Holland was one of the few Sinn Féin representatives to take part in last month’s march and intends to follow through with a number of motions for its forthcoming ardfheis.

Sinn Féin should become a pro-choice party, support the Citizens’ Assembly recommendations and set out a 32-county women’s health policy: “I am quite determined to bring the party along on this,” she said.

The party’s position is not shared by its younger and female membership, is behind the the curve of public sentiment, too, and needs to change now, she argues strongly.

Minor parties taking potshots and scoring cheap points, that’s what they do

The party is a “broad church”, said health spokeswoman Louise O’Reilly, acknowledging that dichotomy. “It is always good when there is involved and healthy debate.”

A member of the Oireachtas all-party committee, she shrugs her shoulders when asked about other parties making a virtue of their pro-choice stance and using it as something of a stick to beat Sinn Féin.

“It’s something of a marshmallow stick from people who choose to spend their time criticising us,” she said, “Minor parties taking potshots and scoring cheap points, that’s what they do.”

Sinn Féin’s position will be determined by its membership and that might change at the ardfheis. For her own part, O’Reilly has campaigned to overturn the eighth amendment for all of her adult life.

“People are on a genuine journey. We are willing to listen and take on board the evidence we hear,” she said, adding that critics would be better advised to look at Fianna Fail’s position rather than Sinn Féin’s.

Fianna Fail’s decision at its ardfheis last week to overwhelmingly reject the repeal of the eighth amendment has the potential to undermine the campaign.

Ruth Coppinger of Solidarity is one of those who has criticised Sinn Féin’s policies: “Sinn Féin’s official position is very narrow. It’s not much better than Fianna Fáil or Fine Gael,” she said.

“The party want repeal but abortion only where there is rape, fatal foetal cases or a grave threat to the mental health of the woman,” she said, “They have a young vote. They are undoing and alienating it.”

Coppinger has been impressed by O’Reilly and her colleagues on the committee. “They are coming out with questions that suggest they will go beyond that. They have a problem in that they will have to shift the position in order to achieve that. Their young voters will not accept [the status quo].

Labour’s stance is based on a risk to the health of the mother. However, its representative on the committee, Jan O’Sullivan, has been given authority to listen to, and consider, the evidence and then recommend change.

Privately, Sinn Féin members acknowledge the political headache the party faces. There are no easy solutions. A substantial portion of the membership, but perhaps no longer a majority, opposes major change.

Equally, it knows too, that a major shift is required if it wants to remain relevant to younger urban voters: “I think everybody realises it will have to be addressed,” said one representative privately.

“But we have to move in accordance with our own members’ views and not according to the lectures of other parties.”

Whichever approach is decided, Sinn Féin must be careful to avoid a split.