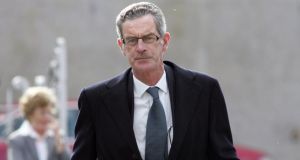 Dick Spring, who last night said he had made contact with Alan Curran. Photograph: Alan Betson / The Irish Times

Former tánaiste Dick Spring has agreed to meet the family of a man who died 33 years ago in a car crash involving the ministerial car in which he was a passenger.

James (JJ) Curran from Raheny in Dublin was a passenger in the other car involved in a collision that happened near Nenagh in Co Tipperary in December 1981.

Mr Curran and a friend who was driving the car were on their way from Dublin to Limerick to see greyhounds that morning. The weather was cold at the time with black ice in the road.

Mr Curran (51) died in the crash in which the former Labour leader and the two drivers of the cars were also injured.

The family of the dead man have had a sense of disquiet over the intervening three decades because Labour, Mr Spring or the State never contacted them in the wake of the tragedy.

Alan Curran, James Curran’s only son, told Classic Hits 4FM the family still felt aggrieved about the lack of contact. He said he, his two sisters and his mother had expected at least some acknowledgment of their loss.

Speaking later to The Irish Times, Mr Curran said: “There was not a Mass card or a letter, or a wreath. We heard nothing and received nothing from Mr Spring or from Labour over all those years.

“Sometime after my father passed away, the Labour Party were canvassing in Tonlegee Road in Raheny and my mother went absolutely mad and ran the canvassers away from the door. The person said he would sort it out but nothing every happened.”

Mr Spring last night said he had made contact with Mr Curran and will meet him upon his return from the US to Ireland in 10 days’ time.

Mr Curran said he did not want a confrontation and said he was not angry.