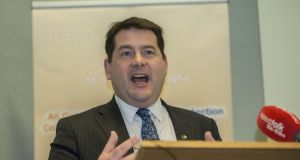 Dara Murphy: His responsibilities have not yet been defined although his appointment as an “expert” may have raised some eyebrows. Photograph: Brenda Fitzsimons

Dara Murphy’s some would say unlikely route from Cork TD to member of the cabinet of Bulgarian commissioner Mariya Gabriel saw him jetting around European capitals for a couple of years for the European People’s Party (EPP) , the grouping to which Fine Gael is affiliated, as their campaign director for the European elections.

The TD had been asked by Fine Gael, during his time as minister of state for European affairs and data protection from 2014 to 2017, to put himself forward for a vice-presidency of the EPP. He was appointed in 2015 and held on to the honorary position after he lost his ministerial job when Leo Varadkar was chosen to lead Fine Gael and become Taoiseach.

Previously an Enda Kenny loyalist, Murphy had backed Varadkar’s rival in the leadership contest, Simon Coveney, but, unlike the latter, who was elevated to Tánaiste, he returned to the back benches.

He was able to take solace in his continued party role at European level, which included a place on its high-level Brexit committee, an important-sounding board for Fine Gael. And in September 2017 he was appointed campaign director for the 2019 European elections by the EPP Political Assembly, a role he embraced enthusiastically while continuing in his role as a TD.

The EPP role is a paid position although a spokeswoman for the EPP refused to be drawn on either Murphy’s salary or expenses. “We do not comment on remunerations,” she said.

His boss was EPP president Joseph Daul, a French cattle farmer from Alsace, who had risen through MEP ranks to lead the EPP in parliament and then throughout Europe as its president. Following the elections, Daul’s term ended and he was replaced two weeks ago by outgoing European Council president Donald Tusk. Helen McEntee, who had succeeded Murphy as Minister of State for European Affairs, was elected comfortably to Murphy’s seat as a party vice-president.

What would Murphy do next?

Gabriel, a Bulgarian former MEP who is a member of the EPP Gerb party, had been a commissioner for the digital economy since 2017, when she replaced the departing Kristalina Georgieva who left to become managing director of the International Monetary Fund.

In the recent reshuffle, she was renominated by Sofia and got “Innovation, Research, Culture, Education and Youth”, a brief that includes the hugely important spending dossier of research (once held by Ireland’s Máire Geoghegan-Quinn).

Designated a temporary agent, “cabinet expert”, Murphy is on a salary equivalent to a “deputy chef de cabinet” of €150,000. His responsibilities have not yet been clearly defined although his appointment as an “expert” may have raised some eyebrows.

However, commission insiders well-versed in the appointment process to the personal cabinets say the title is just that, a designation rather than a description. It is not unusual.

It is understood that Irish commissioner Phil Hogan and the Irish Representation played no part in lobbying for Murphy’s appointment.

Murphy resigned his Cork North-Central Dáil seat on Tuesday night, having been at the centre of a controversy about his non-attendance at Leinster House while claiming a Dáil salary and expenses.