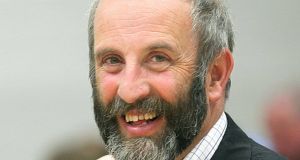 Danny Healy-Rae is to run alongside his brother Michael in the upcoming general election. Photograph: PA Wire

With only a few minutes to go until the noon deadline for handing in nomination papers for the general election, Danny Healy-Rae arrived in the county registrar’s office in Tralee to declare himself a candidate in Kerry alongside his brother Michael.

The two brothers said it had been a “joint decision” for them both to run. Michael Healy-Rae has been an Independent TD for Kerry South since he took over from his father, Jackie Healy-Rae, at the 2011 general election when he won the third seat in the constituency.

There will be 16 candidates in the new five-seater Kerry constituency which has replaced the previous three-seaters of Kerry North and Kerry South.

Michael Healy-Rae, who had handed in his nomination papers last Tuesday, accompanied his brother to county registrar Padraig Burke’s office in Tralee.

He said the two of them and their support team had been deliberating for some time following pressure from constituents for two candidates. The withdrawal from the race last weekend of Independent TD Tom Fleming, a former member of Fianna Fail and the only sitting TD from the Killarney area, had “intensified” the pressure.

There had been “many, many requests over many, many months” to run two candidates in the general election, he said.

He was further persuaded to run for the sake of Killarney and east Kerry, now that Mr Fleming was not running. This meant there was no sitting councillor or TD running in the area.

“I’m especially calling on Tom Fleming supporters, a man that I have high regard for and who sat on my right hand side on Kerry County Council for many years, with Michael on my left, to come out and vote for me.”

He said he knew “every turn and every stone and every person” in the Killarney electoral area.

Fianna Fail have been taken aback at the news. Last weekend when Mr Fleming pulled out, leaving east Kerry wide open, two Fianna Fail councillors in Killarney, including the party’s director of elections Cllr Niall Kelleher, approached party headquarters seeking to be added to the ticket to mop up the support for the party left in the wake of Mr Fleming. Fianna Fail Senator Mark Daly also asked to be added.

“There’s no possibility,” he said, adding that Fianna Fail had two strong candidates in Norma Moriarty, based in Waterville, and John Brassil from Ballyheigue.