Dáil to be recalled early in wake of golf dinner controversy 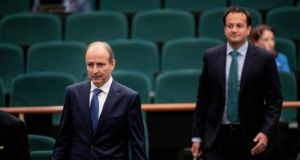 The Government has agreed to recall the Dáil in the wake of the controversy over the Oireachtas Golf Society dinner and criticism by the opposition of public messaging surrounding the coronavirus pandemic.

In a statement, the Government said: “The Taoiseach, Tánaiste, and Minister Eamon Ryan have agreed that the Dáil should be recalled following the reopening of schools. The Taoiseach will make this request to the Ceann Comhairle on Monday.”

The Dáil had been due to complete a six-week recess, returning on September 15th. Schools are due to re-open from the end of next week, meaning the Dáil is likely to return at least a week early.

However, Labour leader Alan Kelly said there was no reason why the Dáil could not return this Tuesday.

“Announcing in the middle of the night a recall of the Dáil that won’t happen for over a week sums up the chaos at the heart of this government,” he said.

“A delayed return of the Dáil is not acceptable, and it should come back this Tuesday, 25th August.

“We have too much to discuss,” he said.

“It makes no sense that the Taoiseach, Tánaiste and Minister Ryan are prepared to wait over a week in the hope this storm will pass.”

The Taoiseach had on Friday rebuffed opposition demands to recall the Dáil, saying the Government’s priority was to ensure a safe reopening of schools this week.

Opposition parties had been seeking an early resumption of sittings amid criticism of, not only of the golf dinner but also, the Government’s handling of new public health advice issued last week.

There were claims the new regulations, which among other things extended restaurant opening hours by 30 minutes while returning sports events behind closed doors, were incoherent and caused confusion.

Minister for Education Norma Foley is also under pressure to reassure parents and teachers that schools are properly prepared for their reopening.

The announcement by the three party leaders for an early return of the Dáil came just hours after Taoiseach Micheál Martin and Tánaiste Leo Varadkar asked Phil Hogan to “consider his position” as EU Commissioner after attending the controversial dinner along with more than 80 people.

Since June 29th indoor gatherings have been restricted to 50 people under the Government’s public health controls.

Further restrictions announced last week identified only weddings and artistic and cultural events as being allowed to have groups of up to 50.

Moreover, the latest regulations say tables in restaurants should not exceed six people, from no more than three households.

“The Taoiseach and the Tánaiste did speak with the Commissioner today and asked him to consider his position,” a Government spokesperson said in a statement on Saturday.

“They both believe that the event should never have been held, that the Commissioner’s apology came late and that he still needs to give a full account and explanations of his action.”

The move puts Mr Hogan’s future as European Commissioner for Trade in doubt and is also likely to increase pressure on Supreme Court judge Séamus Woulfe, who was also in attendance.

Mr Martin and Mr Varadkar have not spoken to European Commission president Ursula von der Leyen, who would have the power to remove Mr Hogan from office. Mr Hogan’s appointment as Commissioner was ratified by the European Parliament after being nominated by the previous government.

Mr Hogan and Mr Woulfe were among more than 80 people who attended last Wednesday night’s dinner at the Station House Hotel in Clifden, Co Galway.

Attendees have come under pressure to also disclose the length of time they were present at the event.

Under Covid-19 restrictions announced by Mr Martin and Mr Varadkar two weeks ago, restaurants were required to close at 11pm, with diners allowed only an hour and 45 minutes for their meals.

One of those in attendance at Wednesday night’s dinner at the Station House Hotel in Clifden, Co Galway, said it started shortly after 9pm.

After the meal there were four separate speeches. Among those to speak were the society’s captain and Independent TD Noel Grealish; the society’s president and former Fianna Fáil TD and senator Donie Cassidy; and Fianna Fáil councillor Donagh Killilea, who spoke on behalf of his family, who shared a table at the event.

The dinner was organised to pay tribute to his late father, the former Fianna Fáil MEP and TD Mark Killilea, as well as mark the society’s 50th anniversary.

There was also a prize-giving, and according to one person present, families of winners took time to take photos.

It is understood former Fine Gael minister Mr Hogan won one of the prizes, a George Foreman grill.

On the question of a possible breach in the 105-minute time limit for events, Sinn Féin leader Mary Lou McDonald told The Irish Times: “The public needs to know if multiple breaches of the guidelines occurred.

“I would ask those present at the dinner to clarify whether the length of time was compliant with the regulations and to be clear about how many regulation breaches took place. The attendees must be up-front about what happened and how the rules were breached. ”

Mr Cassidy has said he will fully cooperate with a Garda investigation into the affair.

Under Covid-19 regulations it is a criminal offence to organise an event with a larger number of people than is permitted by the regulations.