The young Fine Gael politician has had a meteoric rise, but her views on abortion have left her standing on a precipice. How she votes could change her career 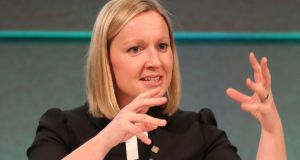 Crisis of conscience: Lucinda Creighton has thrived in the European portfolio but has had conflict within Fine Gael. Photograph: Justin Mac Innes/Getty Images

Decisions, decisions. Lucinda Creighton faces a difficult choice next week when the Protection of Life During Pregnancy Bill returns to the Dáil. She can vote with her conscience to reject the draft law, prompting expulsion from Government and the Fine Gael party. But to keep a job she loves, she must vote for a law which she believes to be fundamentally wrong. She objects to the suicide clause.

This is not her only ongoing clash with Taoiseach Enda Kenny. Creighton also wants to retain the Seanad, putting her at odds with her leader on two of his prime policy initiatives.

For a 33-year-old politician who already has first-name recognition, a moment of truth now beckons.

Many of her colleagues believe she has already passed the point of no return. She has talked herself on to a political precipice, and they see little scope for her to return without a drastic loss of credibility. “If she doesn’t vote against it now, she’ll look pretty foolish. I don’t see any way for her. She has turned this issue into a huge issue with no way out. I don’t see any alternative for her,” says a Fine Gael TD.

However, another eminent party figure insists she can still claw her way back. “She can argue she did everything possible, right up to the vote, to persuade the Government but believes she can do more within the party than outside it. She’s a bright young person, doing well. I think it would be foolhardy to forsake everything on this one issue.”

Still, it is a mark of the extraordinary situation the Minister of State for Europe finds herself, in that both options carry big drawbacks. “If she doesn’t vote against it now, there could be a field day against her,” another TD says.

The daughter of a bookmaker and a teacher, she grew up in Claremorris, Co Mayo. Her family was not political. She was 27 when first elected to the Dáil in 2007, unseating Michael McDowell in his beloved Dublin South East heartland to become the youngest member of the House. Three years later, she was one of the more ardent plotters in the unsuccessful Brutonite heave against Kenny. As incoming Taoiseach the next year, he saw fit to keep her close to the inner sanctum.

Party rumours
Not known for half-heartedness or half-measures, the single-minded Creighton is as righteous as she is determined. She may have made short work of her tenacious march into the lower tier of Government, but that is hardly the summit of her expectations. Only days have passed since the end of an EU presidency that gave her talents an international platform. Now she seems likely to bring it all to an abrupt halt.

Is she set to throw away a luminous political career or is something else afoot?

In Leinster House, always a cauldron of anticipation and interpretation, the sense is that the funk over the Protection of Life During Pregnancy Bill may yet lead Creighton down another path.

Several theories are in vogue, among them the notion that she might bring some of the anti-abortion naysayers into a new party which is conservative on social issues but liberal on economics. Many foresee problems, however.

A new party could take her out of the political mainstream with the risk that she would become defined by her stance on questions such as abortion and gay marriage, which she also opposes even though she supports civil partnership.

In February 2000, she was the person who explained Young Fine Gael’s adoption of a motion calling for the introduction of a “legal marriage” for same-sex partners. “The Government must introduce a civil contract to recognise the inheritance, insurance and taxation rights of same-sex and unmarried couples.”

Still, her opposition to the Protection of Life During Pregnancy Bill could be an important swaying factor for supporters of anti-abortion people.

Creighton could also align with businessman Declan Ganley, who wants to start a new political movement which respects legislators’ conscience on questions such as abortion. Some of her colleagues question this analysis, however, arguing that Creighton and her Fine Gael pedigree have greater appeal than Ganley to conservatives.

Then there is the question of economic policy, on which she is ultra-liberal. Could this open up an alignment with her old rival McDowell? His political appetite is back but he has no organisation.

Other observers question how many political figures would actually follow Creighton into a new splinter party. Creighton is well respected for her work rate and her ability to marshall an argument but she is not seen as the best of team players.

Her inner circle is small. It includes Kilkenny TD John Paul Phelan, and her husband, Senator Paul Bradford, a former Fine Gael TD for Cork East who has been in Leinster House since 1987. Her special adviser Stephen O’Shea left last week to take up a journalism job in Doha.

A separate analysis suggests expulsion now from Fine Gael and a quiet period out in the cold might provide an opportunity for her to gain later within the party. The sense is that Kenny is unlikely to bring Creighton into his next Cabinet, keeping her well behind ministers Simon Coveney and Leo Varadkar who are in the vanguard of her generation of senior Fine Gaelers. Waiting in the wings for a few years could give her greater freedom to cultivate grassroots activists.

Yet another theory is that she has simply tired of the political fray, cannot find a way around her reservations about the Bill and has resigned herself to doing something else eventually. In an interview last February, she declared she would not stay in the Dáil “for ever and ever” and may return to the legal career she set aside to pursue politics. It was duly noted at the top echelon of Fine Gael.

All of this must be seen through the prism of Creighton’s outspoken character, her high ambition, her stridency, her caustic view of political opponents and her zeal. “The tragic flaw is impatience,” says one Government figure. “Fifteen per cent less effort would lead to 50 per cent more effectiveness.”

No one doubts her relentless appetite for work. In the unforgiving words of a fellow TD, her uncompromising style recalls one George W Bush – “You’re either with her or against her.”

Another critic agrees, saying there is an inclination to reduce everything to questions of principle. Pragmatism is not a strong point of hers, and some colleagues find her penchant for infighting too much. “It’s as if she’s trying to follow the latter part of Margaret Thatcher’s career. But Margaret Thatcher was very wettish for the first 30 years.”

Creighton likes to be in the thick of political debate. She can be a fount of quotable lines too, saying uncomfortable things for the party hierarchy that might well result in retaliatory discomfort for herself. Her “loose lips” are a talking point in their own right. Last year, for example, she said the Coalition should not invite businessman Denis O’Brien to another economic forum in Dublin due to the findings of the Moriarty Tribunal. A Government spokeswoman described this as a personal view. One week previously, O’Brien and other Irish business figures appeared with Kenny when he opened the New York Stock Exchange for St Patrick’s Day.

Creighton is widely perceived as having thrived in the European portfolio, taking a leading role in the Government campaign on the fiscal treaty referendum. She had an extremely busy EU presidency, impressing many she met along the way. Her website cites 59 flights in the past six months, 74 bilateral meetings and phonecalls with ministers and commissioners, 80 meetings with MEPs, participation in 40 European parliament sessions, 56 speeches about the presidency and 66 interviews and press conferences.

For all that, the clearest sign yet that she may vote against the Bill came last Monday when she read a speech of more than 4,100 words to the Dáil. “I have spoken previously about the fact that I had a very different view on this topic when I was a student. However, after much reflection, my views have evolved over the years as I learned more about the topic,” she said.

“Crucially for me, I stepped outside the groupthink which dominates this debate in Ireland. It seems that if one does not succumb to the accepted view that abortion is a liberal issue, a women’s rights issue and a cornerstone of the progressive agenda, then one is deemed to be a backward, illiberal, Neanderthal fundamentalist who belongs to a different era. The distinct irony of this prevailing view is that it is so illiberal in its intolerance of any alternative outlook.”

Still, critics pointed out that the “groupthink” accusation seemed to discount the possibility that an independent analysis could lead any right-thinking person to support for the Bill.

Evolved views on abortion
Creighton’s views on abortion have indeed evolved. Contemporaries from her time at Trinity College Dublin recall a certain tension over the 2002 referendum in which the Ahern administration proposed removing the threat of suicide as grounds for abortion. Three sources recall that Creighton was active in a group called Trinity Abortion Referendum Taskforce (“Tarts”), which agitated for the union to campaign against the referendum proposal. In the event, the referendum was defeated by 50.42 per cent to 49.58 per cent.

It was as a law student in TCD that she fired up the Fine Gael branch of the party alongside Varadkar. At that time, she also forged useful connections in Brussels with the Youth of the European People’s Party, a branch of Fine Gael’s European affiliate.

Some of these links continue to this day. The Finnish prime minister, Jyrki Katainen, is one such connection. While Creighton has other strong connections in the ministerial ranks of other European governments, her time in the Kenny administration could be running out rapidly.

If she goes, the expectation remains that she will be back.