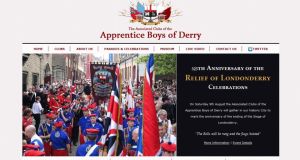 Website promoting the Apprentice Boys’ “Relief of Derry” parade and commemorations on Saturday.

Tens of thousands of people attended the annual Apprentice Boys “Relief of Derry” parade and commemorations on Saturday.

Police in Limavady said a 16-year-old was arrested after missiles were thrown at a bus in Dungiven and four people on board were hurt.

Deputy First Minister Martin McGuinness condemned the attack on the bus returning to Belfast from the parade.

“The stoning and injuries to passengers on a bus in Dungiven returning from Apprentice Boys Parade in Derry was shameful. I strongly condemn it,” he wrote via Twitter.

On Saturday there was also a reenactment of the 17th century Siege of Derry, a march around the city’s historic walls, a wreath-laying ceremony at the War Memorial in the Diamond and a religious service in St Columb’s Cathedral, conducted by the Rev David McBeth, rector of All Saints’ Parish Church, Clooney.

Northern Ireland’s largest loyal order demonstration, to commemorate the 326th anniversary of the Relief of Derry in 1689, featured 140 bands and Apprentice Boys’ clubs.

Apprentice Boys of Derry governor Jim Brownlee spoke of the importance of mutual respect between those on parade over both sides of the River Foyle, and those watching and commenting on it.

At the end of the main parade PSNI district commander for Derry City and Strabane Supt Mark McEwan said there had been three arrests for public order offences, but that should be seen in the context of 15,000 people coming into the city.

“We have seen in the run-up to this event everyone talking to one another and working well together – that includes ourselves, the business community and the City Centre Initiative and the wider community,” he said.

“All the pieces of the operation fitted together very neatly. We have seen the success of parades today in Derry City and in this district have come about because of the willingness of everyone to play their part.”

A republican protest over conditions in Maghaberry Prison also took place in the city centre on Saturday.