State ‘paying €1.60 on social welfare for every €1 raised in income tax’ 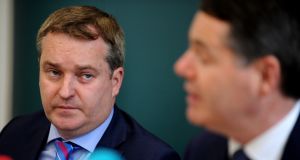 The secretary general of the Department of Public Expenditure and Reform Robert Watt is expected to warn that ‘a delayed recovery in the economy, for example, could see a deficit of up to €30bn this year’. File photograph: Aidan Crawley

For every euro the State is likely to raise in income tax this year it will pay out about €1.60 on social welfare, the Oireachtas committee on Covid-19 is expected to be told on Tuesday.

The secretary general of the Department of Employment Affairs and Social Protection John McKeon is likely to say that it will spend the equivalent of more than €15,000 for each worker and that it will exceed its original budget by more than €10 billion.

The secretary general of the Department of Public Expenditure and Reform Robert Watt is expected to warn that “a delayed recovery in the economy, for example, could see a [Government] deficit of up to €30 billion this year”.

He will warn that while interest rates were low at present “over the medium to long term Ireland, will be issuing and refinancing debt against a less favourable backdrop”.

The ESRI is expected to tell the committee that while borrowing is the appropriate response where a deficit is cyclical, “an enhanced role” for the State will have to mean higher taxes. “Though the precise source and structure of those taxes is an open question, an increase in the total tax take is likely to be needed.”

The Irish Fiscal Advisory Council will say that as the economy exits lockdown, a sizeable stimulus would help the recovery. “However, some adjustments are likely to be needed down the line to get the debt ratio on a safe downward path again.”

Officials from the Department of Social Protection and the Department of Public Expenditure are appearing before the committee just as the numbers receiving the State’s special Covid-19 unemployment payments have fallen below the 500,000 mark.

In an opening statement to the committee, Mr Watt will say measures introduced to date by the Government have helped in supporting the economy during the initial phase of the pandemic when economic activity collapsed.

“As the economy resumes, the focus of policy has moved to supporting this reopening. The next phase of response will have to consider measures that can support economic activity. The suite of liquidity supports in place and the range of further enterprise measures will be critical.”

“In addition, there may be merit in considering measures that can boost demand and activity such as infrastructure investment or measures to stimulate consumer spending. Any additional public investment could also play a role in meeting other priorities in areas such as housing and climate. There will also be a central role for the suite of training and activation supports which can assist people in moving into employment as the economy reopens.”

In his opening statement, Mr McKeon will say there is “no doubt but that the measures taken to flatten the peak and reduce the impact of the pandemic on demand for health services had the effect of transferring that peak into the labour market and that demand onto the department’s jobseeker supports”.

Mr McKeon will say it was encouraging that from a peak of more than 600,000 payments at cost of over €210 million per week, the numbers receiving the pandemic unemployment payment had fallen back to 499,000, at a cost of about €175 million. The department’s focus was “now turning towards helping people whose employment doesn’t recover”.

On Monday, the Department of Employment Affairs and Social Protection said 498,700 people would receive the €350 Covid-19 unemployment payment this week, a reduction of 18,900 on the figure for last week.

The department said that over the last week 33,000 people had closed their claim for a payment. It said 27,600 people had reported that they would be returning to work.