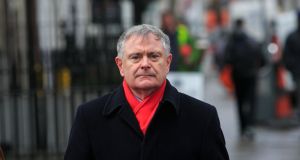 Labour Party leader Brendan Howlin: he has an impressive ministerial record and is a good Dáil performer, as are his colleagues. Photograph: Gareth Chaney Collins

Labour activists say they have observed a change for the better among voters, following the party’s dark night of the soul in last year’s general election.

“The reception is less chilly in recent times, but we have a long way to go,’’ said a veteran canvasser.

Labour’s hammering at the polls – returning with just seven seats, a loss of 30 compared to the previous election – battered morale.

“We held the line on core social-welfare provisions and we were the prime movers in the same-sex marriage referendum,’’ said a former TD. “But we got no thanks.’’

Others were more circumspect, privately saying the party’s fate was sealed because of the promises made to voters during the 2011 general election campaign.

“We promised too much and simply could not deliver,’’ said another former TD. “The tragedy is that we did not have to go as far as we did to win the seats.’’

The post-election fallout saw a change of leader, as Joan Burton made way for Brendan Howlin who has the formidable task of rebuilding the party.

One year on from the election it is clear that, while the public mood has softened, consistently poor opinion-poll ratings suggest a long journey ahead to regain the confidence of voters.

Howlin, with an impressive ministerial record, is a good Dáil performer, as are his colleagues.

However, lambasting the Government, while having so recently left office themselves, inevitably raises credibility issues.

Some Fine Gael Ministers, who sat in Cabinet for five years with Labour colleagues, bristle when their one-time coalition partners criticise them on performance and policy issues.

While Labour is unconcerned about Fine Gael sensitivities, it is sensitive to how the public might view its criticism of people it shared power with up to recently.

Tuning into the public mood as an Opposition party in the era of new politics is a major challenge for the party.

Howlin’s judgment was called into question when he called on Taoiseach Enda Kenny to cancel the traditional presentation of a bowl of shamrock to US president Donald Trump in the White House on St Patrick’s Day.

Some within the party were unnerved, arguing that while it appeared to steal a march on Sinn Féin – whose president, Gerry Adams, is himself visiting the US – it also smacked of desperation.

“If we were still in government, we would have to argue the Taoiseach should go,’’ a Labour source said.

There was some unease, too, when Howlin claimed in the Dáil under privilege that he had spoken to a journalist who had “direct knowledge’’ that Garda Commissioner Nóirín O’Sullivan had made “very serious allegations of sexual crimes having been committed by Sgt Maurice McCabe’’ to journalists.

He later clarified that the journalist had not been spoken to directly by Ms O’Sullivan, who strenuously denied the allegation.

Labour has to carve an identity in Opposition and target key constituencies in an organisational drive. And it also needs luck, that sometimes elusive element in political recovery.