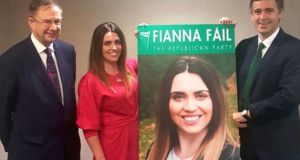 Fianna Fáil TD Éamon Ó Cuív insists he did nothing wrong by attending the launch of what appeared to be the announcement of a candidate running under the party banner in Northern Ireland.

Mr Ó Cuív and Senator Mark Daly attended the election launch of councillor Sorcha McAnespy, who is an independent councillor on Fermanagh an Omagh District Council.

Ms McAnespy was unveiled as Fianna Fáil candidate for the Northern Ireland local elections at the event on Thursday night, but party headquarters later insisted no decision has been “whether or not it will contest elections in the North”.

“It follows then that it has selected no candidate to contest these elections,” the statement added. “Discussions between the party and the SDLP are ongoing and a statement on our future intentions will be made in due course.”

Mr Ó Cuív said Ms McAnespy is a member of the party, and said Fianna Fáil rules were that party members could not stand for office under a non-party banner.

Despite some reports, the party has made no decision with regard to contesting the 2019 NI local elections. The party is continuing its discussions with the SDLP.

Other party sources said TDs and senators had no role in the selection of candidates but Mr Ó Cuív insisted the event in Omagh, Co Tyrone – which was advertised as a meeting on Brexit – was an election launch and not a selection convention.

“We are going to look at it and see what happened,” one source said. It was added that the rules of the party had been the same since Fianna Fáil was founded by Mr Ó Cuív’s grandfather, Éamon de Valera.

However, one member of the Fianna Fáil front bench privately said Mr Ó Cuív, Mr Daly and others may be getting frustrated at the lack of progress on the talks with the SDLP.

“There is a little bit of frustration at inertia from the leadership on this issue,” said one senior TD. “We are a registered political party in the north of Ireland. They have upstaged the leader and probably fast-forwarded the process.”

It was added that party leader Micheál Martin may have to make his intentions clear on the SDLP merger. Mr Martin recently gave the ard chomhairle a brief update on the talks but provided no major details.

SDLP leader Colum Eastwood said he had spoken to Mr Martin, and that it was “pretty clear this didn’t come from Fianna Fail headquarters.”

“We don’t take it very seriously,” said Mr Eastwood. “As you saw last night and this morning with the statement from Fianna Fáil, it’s not a Fianna Fáil sponsored event.

“Of course, people are keen to run for election and support candidates across the island, and that’s fine and everybody’s entitled to do that,” he said on Friday.

Ms McAnespy said she was “dismayed” and “not sure what that is about”. She told RTÉ’s Today with Seán O’Rourke: “We’re an all-island party, I can’t not run as a party candidate.”

“We were invited, I’m her director of elections. I was invited to launch the campaign as a public representative.”