Coalition has no plan to take more refugees 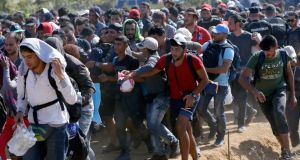 The Government will make no commitment to accept more than the 600 refugees it has agreed to, Minister for European Affairs Dara Murphy has said.

Mr Murphy said the European Union had earlier this year requested that Ireland take 600 of the 40,000 refugees to be dispersed throughout member states and the Government had agreed.

He told RTÉ Radio’s This Week Ireland would continue to play a very significant role in the migrant crisis but he would not put a figure on how many more refugees the Government would be willing to take until a proposal was made.

Mr Murphy also pointed out the significant role that has been played by the Irish Naval Service in its rescue mission in the Mediterranean.

“We need to be very unambiguous and clear about the number of migrants we are taking, relocating here in Ireland. Six hundred is the amount the European Union has requested of us to take. We will continue to play a very significant role,” he said.

It was reported last week that German chancellor Angela Merkel had criticised Ireland for not taking its fair share of the refugees entering the EU, but German officials later dismissed the reports. She said some countries including Ireland were not participating in common European asylum policy.

Officials in Berlin said this was not a criticism of Ireland, which secured some opt-outs from EU asylum law in 1999, but an acknowledgment of this fact. They said there was nothing stopping Dublin from opting into a new asylum deal to help share the burden.

He said it was too soon to put a figure on it, but said justice departments throughout the EU were currently assessing the response to the crisis.

Fianna Fáil spokesman on Europe Timmy Dooley criticised Mr Murphy’s refusal to commit to stepping up the response to the crisis.

“The Minister was making a concerted effort to distance himself and his Government from the crisis. Rather than show leadership in keeping with Ireland’s reputation as a compassionate nation, it seems the Government is content to sit back, do as little as possible and take direction from Europe. This is simply unacceptable,” he said.