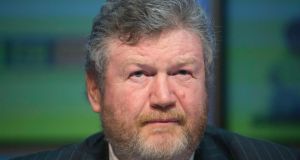 Minister for Children James Reilly has established a working group, which includes representatives from several Government departments, to look at the childcare issue. Photograph: Collins

Government efforts to make childcare more affordable and allow increased numbers of parents to enter the workplace are likely to focus on widening access to after-school care.

However, doubt is being cast within Government on whether it can deliver on the promise of a second free pre-school year within its term of office.

The Coalition has accepted in principle the idea of introducing a second year of free pre-school, a proposal that was included in a 2013 report into child benefit for Minister for Social Protection Joan Burton. It is understood it is currently unclear if this will happen in next year’s budget due to financial constraints. The budget will include other childcare measures but tax breaks are now seen as unlikely.

Minister for Children James Reilly has established a working group, which includes representatives from a number of Government departments, to look at the issue. In a reply to a parliamentary question from Kerry Fine Gael deputy Brendan Griffin last week, Dr Reilly said the group will “look at the provision right across the zero to six age group as well as consider the after-school needs of older school-going children”.

Increasing access to after-school care is seen as the best value for money and more affordable in the short term. In particular, the focus will be on women who took a few years out of work during their child’s early years but want to return to employment once their children are in school or pre-school.

Dr Reilly’s group is expected to report by the summer but it is understood some of its work will be further developed by the time of the spring economic statement. The statement is part of a push by the Government to bring the drafting of economic policy into line with the rest of Europe, under the European semester process.

An update must be provided to Europe in April, and the European Commission and European Council make recommendations on the structural reforms they would like to see.