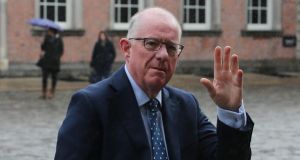 Minister for Foreign Affairs Charlie Flanagan has said he regrets if he caused offence when suggesting he had left out the letter ‘n’ out when tweeting about ‘cult politics.’ Photograph: Niall Carson/PA Wire

Minister for Foreign Affairs Charlie Flanagan has said he regrets if he caused offence when suggesting he had left out the letter “n” out when tweeting about “cult politics”.

In a New Year’s Eve message on his twitter account, Mr Flanagan said: “2015 offers Ireland the choice of Constitutional politics or Cult politics.”

The message, clearly directed at Sinn Féin, elicited a very provocative response from its supporters including Donegal TD Pádraig Mac Lochlainn, who attached a picture to a tweet showing Blueshirts giving a fascist salute in the 1930s. The message on the tweet read: “Hopefully cult politics doesn’t make a comeback.”

Another twitter user responded: “Think it was a spelling mistake” to which Mr Flanagan replied: “Yep, left out the ‘n’.”

2015 offers Ireland the choice of Constitutional politics or Cult politics.

It was understood that it was intended as a half-joke or a smart comment to Mr Mac Lochlainn’s tweet and a string of provocative tweets from Sinn Féin supporters and others. However, his linking of the word “cult” with the rude “c” word provoked a flurry of protest on Twitter that continued into yesterday.

Mr Flanagan told The Irish Times: “I regret if any offence was taken from the tweet” and said he would not be making any further comment.

The responses to the tweet were predominantly negative, although many came from people coming from a particular political perspective.

Of those with no seeming political attachment, one person wrote that the Labour shadow attorney general in the UK had resigned for less. Another wrote that she had written to the Taoiseach demanding the Laois TD resign as a Minister.

It’s not the first time that Mr Flanagan has found himself caught up in controversy on Twitter. In late 2012, in the run-up to the budget, he asked in a tweet if Minister for Social Protection Joan Burton had a “Government deathwish”?

It came at a time when Ms Burton, now Tánaiste, was warning about the consequences of onerous cuts in welfare if her department’s budget faced drastic reductions in budget.