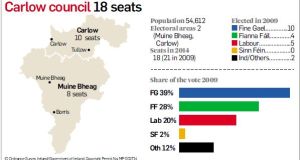 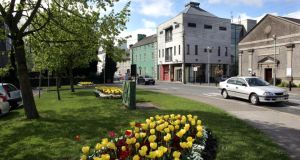 Significant boundary revisions and a reduced number of seats mean there are few certainties for candidates seeking election to Carlow County Council.

The old Carlow East, Carlow West and Tullow districts have been merged into a single Carlow electoral area, leaving 10 rather than 13 seats open to those seeking to represent the more densely-populated north of the county.

The Muinebeag district, taking in the vast majority of Ireland’s second smallest county, has been converted into an eight-seater which now includes the former Borris electoral area. Other changes include the abolition of town councils in Carlow and Bagenalstown and the return of part of Graiguecullen to Laois.

A total of 37 candidates are in the hunt for the council’s 18 seats, with candidates saying a mixture of local and national issues are being raised on the doorsteps such as water charges, property tax, unemployment, wind turbines, housing and the loss of medical cards. There is serious opposition to the erection of pylons in the county as part of the €500 million GridLink project.

Carlow County Council has been controlled by Fine Gael and Labour since 2009, but the Coalition parties will not hold what they won back then.

Disappointment
Having taken 10 of 21 seats on almost 40 per cent of the first preference vote in 2009, Fine Gael is fielding nine candidates across the reconfigured districts and sources said a return of six would be a disappointment.

The Fine Gael line-up is much changed, and there was internal controversy over a decision to omit Cllr Pat O’Toole from the ticket in the Carlow district in favour of female candidate Kathy Walsh even though he won a quota at the selection convention. The decision came from party headquarters, and was described by O’Toole as “pear-shaped democracy”.

Rathvilly-based journalist Brian O’Donoghue is well placed geographically, and Walsh is seen as having a decent platform in Tullow. In Carlow town, school principal Fergal Browne is expected to hold his seat, but Cllr Wayne Fennell and Cllr Tom O’Neill, a late addition to the ticket, could lose out.

The four Fine Gael councillors in the Muinebeag district are well spread geographically but it would be quite a feat if Tommy Kinsella, Denis Foley, Michael Doran and John Murphy take half of the new district’s seats.

Fianna Fáil polled 27.2 per cent of first preference votes in 2009 but only took four seats. Even with a reduced number of openings on the council, the party, which is running seven candidates, should improve on that result.

In the Carlow district, 2009 poll toppers Jennifer Murnane-O’Connor and John Pender are tipped to retain their seats, but Cllr Anne Ahern could come under pressure from Fintan Phelan, a young candidate believed to have strong support from party headquarters.

In Muinebeag, Fianna Fáil could take two seats, with Cllr Arthur McDonald seen holding his own and PJ Kavanagh more fancied than David O’Brien to join him on the council.

Despite having polled just 1.9 per cent in 2009, Sinn Féin has a chance of taking a seat in both areas, with Andy Gladney said to be doing well in and around Bagenalstown, while town councillor John Cassin is seen as better established than party-mate Jim Deane in the Carlow district.

Labour, which converted 19.5 per cent of the vote into five seats in 2009, is expected to lose ground. Its Muinebeag candidates William Quinn and Jim Townsend, a former senator, polled strongly in 2009, but were operating in separate electoral areas.

The junior party in the Coalition has three councillors defending seats in the Carlow district – Des Hurley, William Patton and Caroline Townsend – but would do well to hold two in this new electoral area.