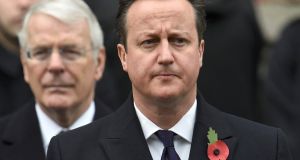 British prime minister David Cameron is mindful and understanding of the Government’s serious concerns about the implications of Britain leaving the European Union, according to senior sources in both administrations.

Taoiseach Enda Kenny will visit London today where he will deliver a key address, focusing on “Brexit” to the Confederation of British Industry (CBI) in London, as well as meeting Mr Cameron in Downing Street.

Ahead of the visit, sources in the British and Irish governments have said his remarks, while new to the CBI, will be familiar to Mr Cameron and to his ministerial colleagues, and that they had no political difficulties with the issues he is raising.

A Government source said: “Our views are generally well received, except perhaps by some on the Eurosceptic side. Our interests are so clearly at stake [in the event of Brexit] that nobody would expect us to be silent. They understand.”

Similarly, a source on the British side said: “The unique Irish angles to Brexit are well understood and the prime minister understands them.”

The source instanced the Border, the impact the exit might have on stability within Northern Ireland and on the Irish economy, although it was pointed out the reported losses of €10 billion a year to the State was very much a doomsday scenario.

In his speech, Mr Kenny is expected to strongly support the British argument in relation to reforming the single market, the digital market, and trade.

However, there are difficulties between both governments on the issues of migration and welfare, as well as the potential difficulties that arise from Ireland’s membership of the euro zone.

Separately, in Dublin today Tánaiste Joan Burton will also acknowledge that states such as Britain have legitimate grievances as to how the EU has conducted its affairs.

Ms Burton, in a speech to the European Movement, will say that the EU’s initial response to the financial crisis was tardy and lacking.

“Many citizens – including in Ireland – felt that solidarity from Brussels with individual member states was absent during the worst of the crisis. They saw policy being dictated from the centre, and this jarred with everything they thought the EU was supposed to be,” the Tánaiste is expected to say.

She will say she had doubts of her own following the EU’s initial response to the crisis, and that as a social democrat she repeatedly argued the case for the EU to shift towards a policy based on investment, growth and job creation.