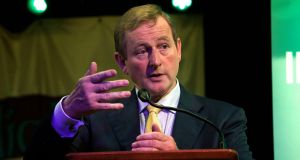 An emergency Cabinet meeting is expected to be held on Friday as the Government begins to prepare for the impact of Brexit on Ireland, the prospect of which was repeatedly described as an almost nightmare scenario by Ministers and officials in Dublin. Photograph: PA

The British decision to leave the European Union “clearly has very significant implications for Ireland”, the Government has said in a statement as the Cabinet prepares for an emergency meeting.

In what is effectively a holding statement, the Government said it “notes the outcome of the UK-EU referendum this morning”.

“This result clearly has very significant implications for Ireland, as well as for Britain and for the European Union.”

The Cabinet will hold an emergency meeting this morning to “reflect on” the fallout of Britain’s decision to leave the European Union.

The Government will also begin to prepare for the impact of Brexit on Ireland, the prospect of which was repeatedly described as an almost nightmare scenario by Ministers and officials in Dublin.

Taoiseach Enda Kenny - who led a Government campaign to keep Britain in the EU - is expected to make his statement from Government Buildings following the Cabinet meeting, which is provisionally scheduled to begin at 10 am.

It is understood Mr Kenny will not speak until after the most significant events in London, such as a statement by British prime minister David Cameron, have concluded.

The Taoiseach’s statement is pencilled in for 11am.

A contingency plan for intense diplomatic and communications with the UK and European institutions will also swing into action with the key aim of protecting Irish interests amid the Brexit fallout.

Officials from Mr Kenny’s department and the Department of Foreign Affairs have been in contact throughout the night and morning and Minister for Foreign Affairs Charlie Flanagan is also expected to make a statement.

Earlier this week, Minister for Finance Michael Noonan said a Brexit could reduce Irish GDP by 1.2 per cent and reduce the amount of money available to the Government in the years ahead.

Mr Noonan also said there is “full scale contingency programme” to be considered by Ministers this morning.

Mr Kenny has warned that Brexit will lead to the reintroduction of a hard border with Northern Ireland and the Revenue Commissioners have already examined the logistics of future customs checks between North and South.

Officials have said, however, that full scale contingency planning has not yet been possible because the terms and conditions of a UK exit from the EU are not yet known. The process of leaving the EU will take at least two years and will involve intensive negotiations with all member states.

The main concerns of the Government on Brexit centre on the €1.2 billion of trade between Ireland and the UK every week; the Northern Ireland peace process; the fact that Britain was an ally in the EU in pursuing similar goals; and the Common Travel Area between Ireland and Britain.

Official estimates are that trade between Ireland and the UK could drop by 20 per cent in the medium term, with the fall in sterling also having an impact on tourism and Irish exports to the UK .

In the forthcoming negotiations on Brexit, Ireland will seek to stress its special relationship with Britain, including on Northern Ireland.

Officials acknowledge Ireland will suffer more economically than any other EU country from Brexit, and new strategies will have to be developed to mitigate against this.

This will include the development of new export markets and competing more intensively for foreign direct investment that may decide to leave Britain for other EU countries.

This could include financial and business sector companies now based in the UK to serve the EU.