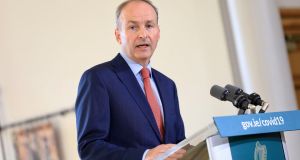 The Government’s surprise decision not to increase the numbers of people allowed at outdoor events from 200 to 500 was based on safety concerns about the way people travel to and from games.

The decision to keep the numbers allowed to attend indoor events at 50, rather than going to to 100, had been expected, but the decision not to increase permitted outdoor numbers had not been anticipated.

Speaking following the Cabinet meeting, Taoiseach Micheál Martin said outdoor stadiums posed little risk of Covid-19 transfer, but there are concerns about the way people get to sporting events.

People congregate before and afterwards, said acting Chief Medical Officer Dr Ronan Glynn, while there have been multiple instances of people sharing transport.

Urging GAA members to be patient, the association’s president John Horan said the situation “isn’t going as fast as we want” but said the playing of games would continue.

“We don’t want our members becoming too despondent or disheartened,” Mr Horan told GAA.ie. “What’s important is that we have the games back and we keep them back and we continue to be vigilant and show leadership.”

There had been speculation ahead of the Cabinet meeting that pubs might be allowed open on a regional basis, if the incidence of Covid 19 was low in those areas.

However, Dr Glynn rejected this, saying that Ireland is far too small a country to allow such regional differentiation: “It sounds good in principle but it would would work [only] in larger geographic areas,” he said.

“From the perspective of small country like ours, here people travel across the country all the time and [potentially] bring the virus [with them].

Facing questions, the Taoiseach said he did not believe that there was a link between an alleged growth in the number of house parties and illegal drinking dens and closed pubs.

“On house parties, we would urge people to curtail house parties in accordance with the guidelines. There is no evidence of a correlation between house parties and the fact that pubs remain closed,” he argued.

“There is no evidence that if you open pubs, house parties will stop.”

Pointing out that many new cases are among those under 45 years, Dr Glynn said more efforts would have to be made to reach out to younger people.

Concerns have been expressed in recent days of Irish tourists arriving back from non ‘green list’ countries and not being monitored to see if they are quarantining for 14 days.

Minister for Health Stephen Donnelly said the passenger-locator forms would be moved online and there would be an increased public-health presence at airports.

The average number of cases had increased in 14 of the 15 green-list territories and countries over the past two weeks, he said.

“So far the tracing of passengers arriving here has been a shambles, with only 7 per cent receiving calls and half of these not being answered. Three separate Government departments continue to play a bizarre game of pass the parcel over who should have responsibility for the follow-up system.”

Minister for Social Protection Heather Humphreys said that any workers in sectors which were still closed, including pubs, arts and entertainment, would not be required to meet the ‘genuinely seeking work’ requirement to receive their payments, as their sectors will reopen once restrictions are eased.

Sinn Féin leader Mary Lou McDonald said the decision yesterday would come as a major disappointment and would increase anxiety. She agreed, however, that the need for caution over reopening remained.

Meanwhile, Waterford FC has suspended all activity after a second player at the club reported Covid-19 symptoms.

An FAI statement said the player had reported suspected Covid-19 symptoms to the club this morning and had not been involved with the first team for their league win at Shelbourne last Saturday.

Waterford are due to host bottom-of-the-table Cork City at the RSC on Saturday.