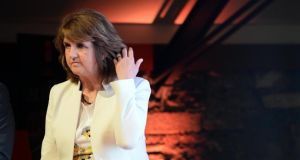 More information may be needed about the details of people who bought shares in Siteserv in the weeks before it was sold in March 2012, Tánaiste Joan Burton has said. Photograph: Eric Luke / The Irish Times.

More information may be needed about the details of people who bought shares in Siteserv in the weeks before it was sold in March 2012, Tánaiste Joan Burton has said.

It was reported on Sunday that share activity in Siteserv surged in the month before it was sold by the Irish Bank Resolution Corporation (IBRC), formerly Anglo Irish Bank.

The Sunday Times also reported that the share register, containing details of those who bought the shares, was handed over to liquidator Kieran Wallace of KPMG in July 2012.

The sale of the company to a firm controlled by businessman Denis O’Brien for €45 million has generated significant controversy this week with the deal involving a writedown of more than €100 million.

Details of strained relations between IBRC and the Department of Finance around the time of the sale have been revealed in Freedom on Information documents.

Minister for Finance Michael Noonan announced last week that Mr Wallace will conduct a review into a number of sales by the IRBC.

Speaking at a Labour Party event on Sunday, Ms Burton said “the transactions went through the stock exchange so we may need some information on exactly where that documentation would be”.

“First of all, the Government has made it clear and I want to make it clear that I want to see all of the relevant information made available and published,” she added.

The Tánaiste said Mr Noonan had appointed the liquidators to address the issues and that they would report back in a number of months.

“If there are further enquiries required to address specific issues then I am perfectly happy to see that happening in the most appropriate format,” she said. “At the moment, we essentially have a scoping and an examination of documentation.”

He told RTÉ’s The Week in Politics that Mr Noonan should direct the liquidators to publish the share register and that he believed there had been “a bit of a cover-up” in terms of what was known about the sale of the company.