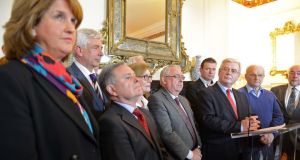 Eamon Gilmore’s decision to resign as Labour Party leader has triggered a leadership race with a raft of early hopefuls, but has also raised serious doubts about the ability of the Coalition to survive its full term.

At least seven Labour TDs were last night reported to be considering entering the race to succeed him, but the field is expected to narrow by the time nominations close on June 3rd.

The membership of the party is expected to face a choice of at least one senior Minister and at least one of the younger generation of Labour TDs.

The indications last night were that Minister for Social Protection Joan Burton will be a leading candidate for the post. Her Cabinet colleague Brendan Howlin was reported to be considering the position. Sources said he had been contacted by many members of the party urging him to stand. However, he has twice failed to win the leadership and may be reluctant to run again.

‘Core Labour values’ Ms Burton has already contacted a number of TDs seeking their support. Sources in her camp said the primary goal in the coming days would be to build a team to fight the campaign. They said she would focus on “core Labour values” and support in the working classes and among public sector workers, and bringing the party back to its level of 10 to 12 per cent support.

Her camp said gaining support of members of the parliamentary party would be crucial in bringing rank-and-file members to her side. It was claimed she had a proven ability to reach out to Labour supporters. A priority for Government would also be to set out “five or six things to improve people’s living standards”.

A senior Fine Gael figure said last night that if Ms Burton won, an autumn election was the most likely outcome as it would be impossible to agree a budget given her stated positions. One Labour TD expressed support for Mr Howlin on the basis that he would be able to get the party through the next budget.

The decision on the new leader will be made by the entire membership and Ms Burton is the early favourite on the basis of her record in Social Protection. She has also proved to be the most popular Minister in the Government in successive Irish Times opinion polls.

Asked on RTÉ’s Six One News if he would contest the leadership, Kerry TD Arthur Spring said: “I don’t know. There are considerations to be made on that but I think there are people who probably have more experience and [are] more knowledgeable than I am. I think I would have to have a conversation with my wife before saying something like this on TV.”

Mr Gilmore’s decision came in the wake of his party’s huge losses in the elections. The Tánaiste and Minister for Foreign Affairs made the announcement in Iveagh House after a meeting with Labour’s senior and junior Ministers.

‘Very bad day’ Mr Gilmore said Labour had “a very bad day” on Friday and said he took responsibility for the results. He said the party “must hear, heed and act” on the outcome of the local and European elections and said the next phase in the party’s development was “best done under new leadership”.

Mr Gilmore said he made the decision to resign at 10.30am yesterday, before a no-confidence motion from eight parliamentary party members was submitted, when he informed the general secretary of the party of his decision. Mr Gilmore said he planned to remain in public office and to contest the next general election.

Speculation that he might be interested in becoming Ireland’s next European commissioner was dismissed by sources in both Government parties last night. His successor will not take over until July 4th. The decision has put the Cabinet reshuffle on hold, which is now expected to take place in the following week.