Trócaire disappointed at allocation, which sees spending at ‘same level as 17 years ago’ 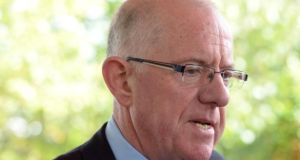 Minister for Foreign Affairs Charlie Flanagan has welcomed the €10 million increase in spending on overseas aid. Photograph: The Irish Times

Government spending on overseas aid will increase by €10 million next year to €651 million.

While the Department of Foreign Affairs welcomed the figure, the aid agency Trócaire pointed out that it meant a drop in development aid spending as a percentage of gross national income.

Overall the budget allocated €651 million for development assistance, an increase of €10 million on 2016. Of this, €486 million will be managed by Irish Aid, a division of the Department of Foreign Affairs, with a further €165 million due to come from other Government departments.

Minister for Foreign Affairs Charlie Flanagan welcomed the allocation, saying it “again represents a very substantial investment of public funds” in the aid programme and was a “clear indication” of Government’s commitment to increase aid spending “in a sustainable manner as resources permit”.

Trócaire said it was disappointed by the budget, which it said left aid spending at the same level as 17 years ago, measured in relation to the size of the economy.

“Ireland has an international commitment to spend 0.7 per cent of national income on helping the world’s poorest people, yet this budget will bring us further from this commitment. According to the Government’s own growth projections this will leave overseas aid at approximately 0.3 per cent of national income - just 30 cent for every €100 the Government spends,” Trócaire executive director Éamonn Meehan said.

Irish Aid was recognised internationally for delivering excellent programmes, Mr Meehan said, so it was “ disappointing that the Government continues to break its promise to properly fund it”.