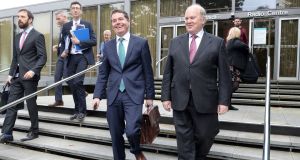 Fianna Fáil was informed in the middle of last week that there would be additional resources in the budget above what Ministers had repeatedly pledged would be available.

However, some Ministers, including some Independent Alliance ones, were not told of the extra resources until Monday night of this week – just hours before the budget.

The Government had insisted before Tuesday’s budget the “fiscal space” – the limit of additional spending to be announced on the day – was €1 billion. However, on Tuesday, Minister for Finance Michael Noonan announced the fiscal space had been recalculated at €1.3 billion, increasing the scope to meet demands for extra spending.

The chairman of the Fiscal Advisory Council, Prof John McHale, has said the total size of the budget package this year, including pre-committed spending increases, tax cuts and budget day announcements, is €3 billion.

A spokesman for the Department of Finance said the recalculation of the fiscal space involved the revision of four different components, which began during the summer and was only completed in the days before the budget. He confirmed it was apparent the total amount available would be revised upwards for some time.

Mr Noonan denied on budget day the size of the budget had expanded as a result of pressure for extra spending from Ministers, insisting it was as a result of the technical recalculations. However, several sources closely involved in the process, including Ministers, said it was their impression the extra resources were found late in the process to smooth the passage of the overall package.

“A lot of this is completely arbitrary,” said one source. “You decide where you want to end up and then you decide how you’re going to get there.”

However, another person involved said they were surprised when the extra money was produced so late in the process.

A spokeswoman for Minister for Public Expenditure Paschal Donohoe said he had brought a memo to the Cabinet last Thursday indicating departmental expenditure ceilings would rise, but the final details were only worked out over the weekend.

According to one Independent Alliance source, some Ministers only became aware of the extra money late on Monday night. A Fine Gael Minister, however, said he had become aware of it a week beforehand.

In the budget debate in the Dáil yesterday, Fianna Fáil leader Micheál Martin accused the Government of failing to control the budgetary process.

“If we assume that the Government was not deliberately misleading people both in public and in private, the appearance of €300 million extra in the last week suggests at best a lack of control,” Mr Martin said. Overall, the Government was happy with how its first budget was received, with several sources noting it had so far avoided any of the “banana skins” that have caused problems in the wake of some budgets. The Dáil debated the budget for several hours yesterday.