Minister for Transport says continued ban from 2021 is ‘not feasible’ 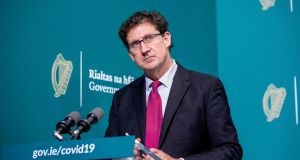 A ban on travel from Britain into Ireland cannot continue “forever and a day” and will be replaced in the New Year with more targeted restrictions, Minister for Transport Eamon Ryan has said.

The Government introduced the ban on travel via flights and ferries from Britian into Ireland until December 31st in light of fears around a mutant strain of Covid-19 that could be more contagious.

Some “repatriation” flights have been arranged in recent days in order to bring home citizens who found themselves stranded in light of the Government announcement.

“We had to have an emergency response to the UK government’s announcement on Saturday evening and by Sunday afternoon we had our emergency response, we were going to have to lock down, ban travel and stop flights and so on.

“But that approach can’t continue forever and a day because we do have to manage our whole range of other priorities. So what we will likely do is introduce further, more detailed regulations around all that travel so we do it in a very safe way.

“This is what the European Commission is recommending. They’re saying rather than having a complete across the board ban, you regulate for specific circumstances.”

Mr Ryan indicated that it would not be feasible to continue with the ban for a variety of different reasons.

“If you look at the papers there was a repatriation flight (on Tuesday night) and I was interested in the reports coming off it. The first lady was someone whose son had died and she buried him in London, so are we going to say for the duration of this thing that in such circumstances you cannot bury your son.

“We want to get the protocols and safe ways of doing it but there will be incidences where people have to.

“I’ll give you another example, a very practical example, on the energy side, we require expert engineers to come in on a regular basis to maintain and to service our power stations.

“That’s just one example that I know of. I’m dealing with it because it’s on my desk.

“On a regular basis we have emergency workers who you have to have in here because they’re maintaining vital infrastructure.”

The Minister said that at a recent meeting of the International Transport Federation last month it was evident from discussions with other countries that Ireland has witnessed “one of the highest reductions in travel” into the country.

“In the next two to three months we will have to maintain those essential workers and those essential reasons why there will be travel, but regulated very strictly on health grounds.”