Brexit: ‘Under pressure’ Johnson ‘conceded too much’, says DUP’s Foster 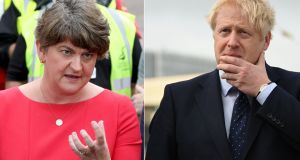 The new agreement, which was announced on Thursday ahead of the beginning of a two-day EU leaders’ summit in Brussels, will be voted on in the House of Commons on Saturday.

The deal leaves all but a fraction of the withdrawal agreement negotiated with former prime minster Theresa May intact, with a new political declaration about the future relationship between Britain and the EU. The Northern Ireland backstop is replaced by a new arrangement under which the North will continue to follow EU regulations on goods.

On Thursday morning, the DUP said it could not support the deal and later repeated its position following the announcement of the agreement.

Writing in the Belfast Telegraph on Friday, Ms Foster confirmed her party’s MPs would not vote for the deal. She wrote: “Tomorrow our Members of Parliament will oppose the proposals. We worked intensively with the [British] government over recent weeks to try and reach a fair and balanced deal.”

Ms Foster said her party regrets that a deal has been reached which it cannot support. “We were not seeking a perfect deal,” she said. “It doesn’t exist. We were seeking a deal which delivered Brexit without erecting barriers to trade.”

She said: “Dublin and Brussels belatedly reopened Mrs May’s deal having rigidly refused to do so. But the prime minister was under pressure and conceded too much by way of agreeing to greater east-west checks than necessary, and settling for a one-sided consent mechanism.”

Ms Foster is critical of the deal’s particulars about the consent mechanism, echoing closely her party’s press releases from Thursday: “While some progress has been made in recognising the issue of consent, the elected representatives of Northern Ireland will have no say on whether we enter these arrangements in the first instance, and the government has departed from the principle that these arrangements must be subject to the consent of both unionists and nationalists.”

Saturday’s vote in the House of Commons will only be the beginning of a long Parliamentary process, she said.

“We will continue to work to shape those outcomes in Northern Ireland’s interests and our votes will be critical in that process,” she said.