Austerity is not responsible for the recovery, experts claim 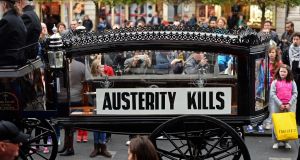 Austerity was necessary to correct Ireland’s public finances, but it was not responsible for the rapid recovery of the country’s economy subsequently, according to a major new analysis of the economic crash and recovery.

The book, Austerity and Recovery in Ireland: Europe’s Poster Child and the Great Recession”, is published by Oxford University Press, and will be launched today by the former governor of the Central Bank Dr Patrick Honohan.

Instead of crediting austerity with the recovery, the book credits Ireland’s strong export industries and buoyancy in the country’s top export markets, along with European Central Bank quantitative easing and historically low interest rates.

Together these factors helped to stabilise the banking system and supported the recovery, according to the book’s contributors who include economists, social scientists, political scientists and other “internationally acknowledged scholars”.

Given that success depended upon external causes, the book warns the recovery is vulnerable to a deterioration in the international environment, a development that contributors warn is increasingly possible.

Describing the policy as one of “auto-austerity”, the book argues that banking policy, Nama, the promissory note device and the decision to convert that note into long-dated government debt were also “home-made”.

Ultimately, the troika offered a useful scapegoat for politicians, but it may not have mattered all that much except as a lender. Ireland’s social welfare system was not destroyed, a fact that may have helped to avoid Greek-style demonstrations.

Several economists find significant fault with Ireland’s perennially procyclical fiscal policy, or – as it was immortalised by Charlie McCreevy – a policy based on the principle that “when I have it, I spend it, when I don’t, I don’t”.

Ireland, he says, is not a “poster child for austerity”; instead it is a “beautiful freak” whose unusual economic structure worked to its advantage in this instance – one dependent upon the openness of the Irish economy.

The book notes that less than a third of the increase in Ireland’s national debt is down to the banking crisis, and that the rest of the debt has been incurred to maintain the sort of society that could not be afforded even for a few years.