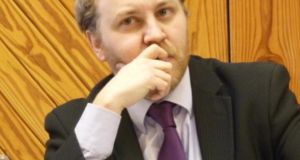 Northern Ireland Green Party leader Steven Agnew said “a new model of government” was needed in the North because of cuts to services affecting “the most vulnerable” in society. Photograph: Green Party NI website.

A new model of government is needed in Northern Ireland as the service cuts being implemented at present are affecting the most vulnerable in society, the Green Party has said.

Speaking as the party presented its Westminster election manifesto in Belfast on Thursday, leader Steven Agnew said the North required a government that “prioritises the common good for the people it serves through a renewed investment in public services, a living wage and developing new green industry”.

“As we have seen over the past number of years, the public services that underpin our health and well-being, education, training and the infrastructure we rely on, have been cut again and again,” he said. “These cuts are affecting the most vulnerable in our society. Yet the traditional parties appear to be set on introducing even more. This cannot go on.”

Green Party deputy leader Clare Bailey says in the manifesto that the programme of “colossal cuts” to public spending and the “dismantling of the welfare state” will lead to damage that “could last for generations”.

The document itself outlines the party’s priorities as the protection of public services, the promotion of a living wage, and the prioritisation of a “green industry”.

In terms of the public services, it calls for an end to austerity “as it is hitting women, children and the disabled hardest”. The party is also supporting a bill to “prevent tax dodging” and opposing cuts to corporation tax. Additionally, it pledges to “keep the NHS in public hands and fight privatisation”.

On the issue of a living wage, the party is promising to “protect workers through regulation of zero hour contracts” and to end “in work poverty”.

In terms of a green industry, the manifesto outlines proposals to create jobs in low carbon technologies, to reduce fuel poverty through investment in energy efficient homes, and to tackle climate change.