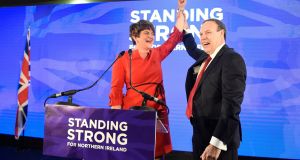 DUP leader Arlene Foster waves to the crowd with deputy leader Nigel Dodds after her speech in the party’s annual conference at the La Mon hotel in Belfast. Photograph: Michael Cooper/PA Wire 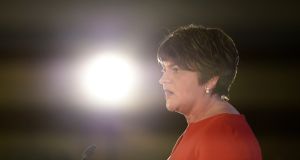 At the DUP annual conference at the La Mon Hotel in Belfast, deputy leader Nigel Dodds quietly alerted delegates to the fact that if a deal is to be done with Sinn Féin, it “inevitably means taking difficult decisions”.

He also pointed up some other hard realities for unionism.

For an annual conference keynote speech, a time normally to cut loose and animate the faithful, party leader Arlene Foster was measured. There was criticism of Sinn Féin obviously, but nothing that should overly antagonise Gerry Adams or Mary Lou McDonald or whoever is running the Sinn Féin machine.

It all appeared to signal a party prepared at some stage to take a challenging decision to reinstate the Northern Executive and Assembly.

But first it needs noting that this was a different DUP conference. There were a lot of unfamiliar faces in the media rooms due to the fact that for once the London press were very interested in the DUP.

That was because Theresa May and her Conservative government is dependent on the votes of the DUP’s 10 MPs to remain in power.

Perhaps some of the British press were hoping for an hour-long debate on creationism, some yogurt currying from Gregory Campbell, some non-PC rabble rousing from Sammy Wilson, some monumental gaffes from Ian Paisley.

They didn’t get it. The DUP army council, so to speak, ensured that this was a tightly-run conference.

East Derry MP Gregory Campbell was allowed to speak but it was by way of a pre-recorded audio introducing deputy leader Nigel Dodds.

Sammy Wilson was given the task of chairing rather than speaking at a panel discussion on Brexit, so he couldn’t do much damage there. Well, not too much.

He referred to how the former Ulster Unionist MP Lord Kilclooney (John Taylor) had apologised for a tweet describing Taoiseach Leo Varadkar as “the Indian”.

Oops, we wondered, what’s coming next?

But it was harmless enough. Whatever about Lord Kilclooney’s comment, as far as Sammy was concerned Simon Coveney and Leo Varadkar with their Brexit warnings were just a “pair of cowboys”.

And, he said Theresa May still had a problem with her cough, as in “coughing up” a billion pounds to the DUP to keep her in office.

Ian Paisley is also a good man for an incendiary quote but he too was confined to chairing a panel discussion on a “United Kingdom for the next generation”.

There was a bit of a sour media note in that the DUP command team had decided that any reporter who missed the deadline to apply for accreditation must pay a whopping £150 to get into the conference.

Whatever about the London journos, those tardy local reporters - either by charm or point blank refusal to divvy up - got through the doors without “coughing up” a penny or cent, although at least one distinguished Dublin journalist didn’t make the journey North because he couldn’t be sure he would be allowed into the conference.

Then again, there was more interesting political fare in Dublin.

Otherwise it was a well-run affair. Dublin and London observers in particular would have been happy that the DUP presented no hostages to fortune in terms of the prospects of renewed DUP-Sinn Féin talks finally ending the logjam.

In a sense it was a mirror image of the Sinn Fin ardfheis the weekend before, where nothing was done or said that would wreck the prospects of a deal.

Some reporters and DUP delegates wondered would Varadkar take a leaf out of the Northern Ireland book of political crisis management.

Perhaps, they offered, beleaguered Tánaiste Frances Fitzgerald might “do a Peter Robinson” and temporarily stand aside in order to get the Southern politicians off the hook of a pre-Christmas general election.

Just an idea, take it or leave it, was the word from the DUP conference.

Of course what happens in Leinster House has a bearing on what might happen at Stormont. The British and Irish governments are hoping the DUP and Sinn Féin will resume negotiations in the coming days but as Foster acknowledged if there is a December election campaign, Sinn Féin surely will be too busy for Northern talks.

If somehow, however, an election is averted, then the central message from the conference is that the DUP is still up for a deal with Sinn Féin.

The key issue blocking a deal is the dispute over an Irish language act. Foster was conciliatory and respectful when talking about the language while restating that in return Sinn Féin must respect British culture. That should be attainable.

On Brexit, she repeated that the DUP wanted a “sensible Brexit” and she had no harsh words to utter against Varadkar or Coveney.

She did say, however, “time was short” to get a deal and if there was no agreement, then British direct rule ministers soon would be running affairs in Northern Ireland rather than locally elected Assembly members.

One of the reasons given for the failure to strike a deal in the past month or so was that Foster did not have the backing of all of her MPs.

Dodds, the deputy leader and leader of the DUP in Westminster, stepped up to the plate here. He was trenchant in his support for Foster.

“At a time when other political leaders are heading for the exit, stage left, Arlene isn’t going away,” he declared.

If he had appended “you know”, it would have had a sharper resonance and connection to Sinn Féin and Gerry Adams, but it did demonstrate Dodds’s loyalty.

And if he is faithful then perhaps he will have the clout to ensure that any DUP doubters in the House of Commons stay constant too.

Dodds also delivered some truths that many in the DUP would have found difficult. He referred to the need “to be alive to changes in demography and shifts in society”, which appeared to be shorthand for stating that unionists must make compromises with nationalism now - before nationalism becomes too strong and perhaps less amenable to compromise.

The most important message in his speech – one directed at delegates and colleagues — was that getting the Northern Executive and Assembly back up and running will “inevitably mean taking difficult decisions”.

That seemed to be code for the DUP taking chances to restore Stormont if Sinn Féin will take chances too.