Amnesty says it has ‘no political axe to grind’ on abortion 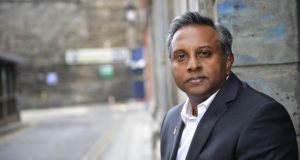 Salil Shetty, secretary general of Amnesty International. Mr Shetty has defended the organisation’s call for the repeal of the Eighth Amendment to the Constitution. Photograph: Aidan Crawley/The Irish Times

The head of Amnesty International has defended its call for a more liberal abortion regime in the Republic, saying the organisation has “no political or religious axe to grind”.

Salil Shetty, Amnesty’s secretary general, said it judged the State’s abortion laws against international human rights standards and found that there was “a very big gap” between them.

“We’re not coming at it from a political angle. We’re coming at it purely on the basis of international human rights standards. Ireland is in breach. It’s just a fact,” Mr Shetty said.

Amnesty was criticised by anti-abortion groups last week after it called for the repeal of the Eighth Amendment to the Constitution, which was approved by referendum in 1983.

It said the amendment, which recognises an equal right to life of the mother and “the unborn”, gave the foetus a privileged position, “at the unacceptable expense of the rights and lives of pregnant women and girls”.

Amnesty believes abortion should be available where there is a risk to the physical and mental health of a woman, and in cases of rape, incest or fatal foetal impairment.

The Life Institute, an anti-abortion group, criticised Amnesty for its “obsession” with the Republic’s abortion laws, saying its stance was undermining the rights organisation’s founding mission.

A Life Institute spokeswoman said: “Amnesty was founded to highlight human rights abuses, especially in regard to political prisoners and those suffering under unjust regimes.

“But now it seems to spend most of its time attacking the rights of the most vulnerable person of all - the unborn child.”

Defending Amnesty’s intervention, Mr Shetty said there was a contradiction between the Republic’s “progressive” positions on gender-based violence, women’s rights and LGBT questions and its “muted” stance on sexual reproductive rights.

Mr Shetty said that the State’s abortion regime meant that it found itself “in strange company” on the global stage.

“Our focus is from the voice and experience of women and girls, but also using the framework of international human rights law.

“Amnesty doesn’t have any other basis. We don’t have any political or religious axe to grind. We’re focused on ‘how much is Ireland in breach of international human rights standards?’ There is a very big gap between where international law is and Ireland.”

Amnesty took a policy decision to support abortion in certain circumstances in 2007, when delegates to its annual conference overwhelming backed a proposal to replace its neutral stance on the issue.

Catholic leaders denounced the shift, accusing Amnesty of betraying its commitment to human rights, and a senior Vatican official called on Catholics to stop funding the group’s work.

The adoption of an abortion policy reflected a wider shift in Amnesty’s work. In 2001, after a long internal debate, the organisation broadened its mandate to include the promotion of economic, social and cultural rights in areas such as healthcare, education, housing and social security.

Previously, its focus had been on civil and political rights, with a reputation built on its advocacy work for “prisoners of conscience” - people who had been jailed for their political opinions or religious beliefs.

It had also lobbied successfully against torture and the death penalty.

Amnesty wants the State’s Constitution to be changed so as to make economic, social and cultural rights enforceable.

Mr Shetty also said that criticism of its stance on economic, social and cultural rights revealed a “north-south” divide.

“If you go to a favela in Brazil and a woman is being beaten up by her husband, by the police, and she doesn’t know how to pay her rent, she doesn’t have a job, how are you going to separate economic rights and civil/political rights? The two are so interlinked,” he said.

“If you go back to the Universal Declaration of Human Rights, that’s where it was said from the very beginning that the two are completely interlinked. The word used was indivisible. You can’t divide them.”