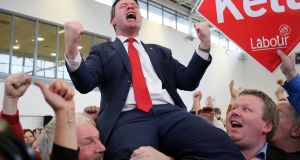 Labour candidate Alan Kelly is hoisted into the air as he celebrates being elected in Tipperary. Photograph: Chris Radburn/PA Wire

“Yeeees!” roared Alan Kelly again and again, his fists pumping, his eyes scrunched closed and his face turning redder than his tie. “Yeeees!”

Some outgoing Labour TDs celebrated re-election to the party’s diminished parliamentary ranks with all the unbridled enthusiasm of a footballer who scores against his boyhood club. Not Kelly, who bobbed up and down on his supporters’ shoulders with the unrestrained, visceral pose of a boxer who had just floored an opponent.

Kelly knew it had been a close-run thing. On Saturday evening, his chances were being written off, his name apparently poised to join that of so many of his defeated colleagues. He stayed away from the packed, claustrophobic count centre at the Presentation Convent for the day. (Kelly was later keen to point out to local media that he “helped rebuild” the school). But by Sunday morning, the mood had changed and his red-jacketed supporters, their ranks conspicuously sparse until then, suddenly multiplied in the hall. By 1.20pm the Labour activists were so certain of success that Kelly himself turned up, flanked by dozens of jubilant supporters.

Kelly attributed his struggle for the final seat to the “tide going out” for the party and the loss of a chunk of Tipperary to the new Offaly constituency under a boundary review. But in the end it was geography that got him over the line. When Fine Gael’s Noel Coonan, who is based in Templemore, was eliminated on the third count, about 1,000 of his votes transferred to Kelly, who is also based in the north of the county, rather than to the second Fine Gael candidate, Tom Hayes. Hayes might have been Fine Gael, but Kelly was local. Labour’s deputy leader was delighted, he said, but it was a “bittersweet” moment after the loss of so many colleagues across the country.

Local media were interested in whether Kelly would be as good for Tipperary as an opposition TD as he was as a minister. He was keen to reassure them. “Sure look, we’ll have to study everything, but I’ll still be able to deliver for the people of Tipperary,” he replied. “I’ve enough relationships built and I’ve the capacity as a TD to represent the people of Tipperary in a very positive way. I’m sure I’ll be able absolutely hugely to deliver for Tipperary when it comes to jobs.” Being in opposition would also give him more freedom to speak his mind, he added.

Across the hall, an elderly Labour party activist reflected ruefully on a bad campaign he said was primarily the result of some bad decisions by the party itself. “They should have picked Alan as leader two years ago. They should never have gone in with Fine Gael in 2011. And Ruairí­ Quinn should not have let in Democratic Left,” said the lifelong activist, who asked not to be named. He also blamed Phil Hogan for his Irish Water debacle and pointed to the election date as a problem. “Hardly any outgoing Government has won an election in February,” he remarked.

As for the future, he said, Labour had to reorganise and reassert itself as a presence in communities across the country. “You have to have a structure in every parish,” he said.

Another Labour activist of more than 20 years’ standing, Noreen Kennedy from Nenagh, agreed that the party needed to sharpen its focus at ground level. “All politics is local. They should be more community based. Alan got some of that with crime and jobs. He chipped into it. That’s the way I would have liked Labour to be,” she said.

While disappointed at the party’s showing, Kennedy believed a spell in opposition could ultimately do the party good. “At times we all need a kick up the backside. It’s no harm to take a little time off,” she said. “I would have loved Labour to get another run at it. They had a lot to offer. But they’ll come back bigger and better.”

With Labour set to return to the opposition benches, Kelly believed Fianna Fáil and Fine Gael should “stop the pettiness” and form the next government. “We did the country a service by putting the country first five years ago. They now need to put the country first. It’s 2016, 100 years since the Rising. It’s absolutely the time. There’s very little between the two of them. They should come together and coalesce. The people expect it. The people voted for that and that’s what they should do now.”

And did he have any regrets about Labour taking a place in Government in 2011? “None whatsoever. I think it was one of the best Governments ever to serve the people. Obviously you make mistakes but by and large you look at what has been achieved, where we are as a country now. Look at our debt levels, look at our employment levels, our growth levels. Look at everything that has been delivered. “It was the right thing to put the country first. It’s now time for us in the Labour Party to put the Labour Party first for a short while.”